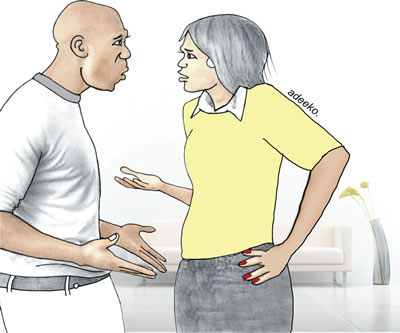 Giving reasons for his decision,   Elijah stated among other things that his wife, Kafilat Adetona,  is deceitful.  According to him, she never told him she was married  with two children when they met  and  before  he impregnated her.

He added that of recent she started claiming that the child she had for me belongs to her father.

He, as such, pleaded with the court to dissolve their marriage and grant him custody of their 12-year-old child.

“Kafilat and I attended the same technical college and we dated. We both graduated from the school, but lost contact when I went for further studies.

“Our path crossed after many years and we started dating again, although I was married with children.

“In the course of our relationship she got pregnant  and  swore never to abort it.

“I later got to know she was married with children.

“I asked her and she didn’t deny it. She told me her husband sent her packing.

“Her mother later requested that I took her to my place.

“I rented  a  place  for her and paid her regular visits there.

“She came banging on my door early one morning. She told me she was worried because she had not seen me for days. That was how my wife got to know about her, “Elijah said.

“I made arrangements for her to move to my place after delivery, but to my chargin,  she  went to her mum’s place.

“When I called my mother in-law on the issue she told me her daughter did not stay in her husband’s house.

“She came with her sister and our baby on the   naming ceremony day and  left immediately the event was over.

“My parents and I begged her for more than a year to move to my place, but she refused.

“I received  pastoral call few years after and was in Abeokuta for five years, pasturing a church.

“I came to Ibadan to pay my children’s school fees and a child ran to me. I later got to know she was the child Kafilat had for me.

“I later called her school to make arrangements for the payment of her school fees and was told her mum had withdrawn her from the school.

“I was able to get in touch with my daughter after much efforts and  took up the responsibility of  caring  for her. I sent her things and paid her school fees through my mum.

“I finally moved my family to Abeokuta. Few weeks after, she started calling me she was not happy and would run away from home.

“I came down to Ibadan, took her to the police station and reported  that she  was threatening  to run away  from home. I was told to take her with me and watch if anyone would report the case of a missing child. After waiting for days, I left for Abeokuta with her.

“Few days later, I was arrested by SARS officials and locked up because my wife alleged  that I kidnapped  her daughter.

“At the police station, my wife stated that  her father impregnated her and is the father of our child.  I was stunned when I heard this.

“Her father also admitted to it.

“I called my father who is an Ibadan high chief.  Through his intervention, I was released, “the plaintiff concluded.

When the defendant was asked the relationship between her and the plaintiff, she replied that she didn’t know him from Adam.

When asked if they both attended the same school, she replied ‘yes.’

“He impregnated me and disappeared into thin air, “she claimed.

“I could have committed suicide, but for my mother. I told him all about myself; my marital challenges and disappointments and he promised to take care of me.

“I believed all his lies, but the scales later fell from my eyes.

“His mother also locked the door against me and our baby.

“He never asked for us until our daughter got admission into the secondary school.

“It was my father who buried our child’s placenta and gave her names, “Kafiila  stated.

After hearing from both parties, the court president, Chief Agbaje Olasunkanmi stated that  more evidence is required before judgment is given.

Ajagbe, therefore, adjourned the case till July 25 and ordered the couple to come to court with their daughter and parents.