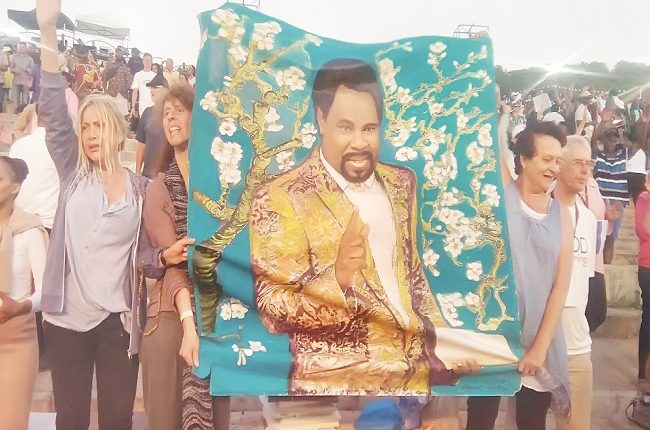 The death of a foremost televangelist and founder of The Synagogue, Church of All Nations (SCOAN), Prophet Temitope Balogun Joshua, has been announced by the church.

His passing is coming exactly seven days to his 58th birthday, June 12.

This was contained in a statement posted on the official Facebook handle of the church.

According to the release, the cleric died on Saturday, June 5, 2021.

“Surely the Sovereign LORD does nothing without revealing his plan to his servants the prophets. – Amos 3:7.

On Saturday 5th June 2021, Prophet TB Joshua spoke during the Emmanuel TV Partners Meeting: “Time for everything – time to come here for prayer and time to return home after the service.”

“God has taken His servant Prophet TB Joshua home – as it should be by divine will. His last moments on earth were spent in the service of God. This is what he was born for, lived for and died for.”

Shortly before his demise, the cleric was reported to have held a program on Saturday at the church’s prayer resort, located a few minutes drive from the main church building at Ikotun, Lagos.

In his message: ‘there is time for everything,’ he emphasized the need for man to understand that God has approved a season for all occurrences in life. The shock of his passing has attracted church members, friends and admirers of the cleric to the headquarters of the ministry where there have been wailing.

Governor Rotimi Akeredolu of Ondo State has described the cleric’s death as shocking. This was contained in a statement signed by his Chief Press Secretary, Richard Olatunde. “Undoubtedly, Pastor Joshua’s demise came as a rude shock. The pains are not mere emotional flashes, they are indeed piercing.

The Ondo-born pastor and televangelist was a philanthropist whose exit will be sorely missed by many,” he said.

It is unfortunate —Ortom

Governor Samuel Ortom of Benue State sympathised with the church, just as he described the death of Joshua as shocking and unfortunate. In a release signed by his media aide, Terver Akase, Ortom said the popular evangelist would not only be remembered for spreading the gospel of Christ but for his humanitarian works through which he touched millions of lives.

The Aare Onakakanfo of Yorubaland, Iba Gani Adams, has described the death of Joshua as very saddening. This is contained in a statement released to journalists on Sunday in Akure by his Special Assistant on Media, Kehinde Aderemi.

According to him, “It is very difficult for me to come to terms with the reality of his death. It was very sad. Prophet T.B. Joshua lived and died for God. His life was a complete definition of God’s generousity and philosophy.”

Also speaking on his death, Oba Yisa Olanipekun, the traditional ruler of Arigidi Akoko, Ondo State, where the cleric was born, told Nigerian Tribune that Joshua gave “global recognition to the town through the works of his ministry and his philanthropic gestures.”

Leader of the apex Yoruba self-determination group, Ilana Omo Oodua, Professor Banji Akintoye, told Nigerian Tribune that the death of the cleric is a loss to the Yoruba nation. Akintoye, in a statement signed by his communication manager, Maxwell Adeleye, said the late Joshua was a great servant of God with outreaches touching most parts of the world and bringing charity to the needy everywhere.

Temitope Balogun Joshua (born June 12, 1963) was commonly referred to as T. B. Joshua and Papa by both his international and local faithful. He was a charismatic televangelist and philanthropist.

His popularity went beyond the shores of Africa through to Latin America, Asia and other continents.

His social media presence had 3,500,000 fans on Facebook. His YouTube channel, Emmanuel TV, which was later shut down on what the platform operators referred to as breach of their policies, had over 1,000,000 YouTube subscribers.

Joshua’s YouTube channel was the world’s most viewed Christian ministry on the platform before its suspension.

However, the building collapse which occurred in his church in 2014, leading to the death of over 80 persons cast blight on his ministry.

Yet, considering his immense contributions to humanity’s development particularly within Nigeria, he was awarded various accolades, notably receiving the Officer of the Order of the Federal Republic (OFR) by the Nigerian government in 2008.

His many foreign crusades

With a burning to reach out to a larger audience, he began visiting several countries, holding evangelistic crusades. He travelled to Korea, Singapore, Indonesia, Australia, Colombia, Mexico, Peru and Paraguay for such intent. He also visited Israel to receive a humanitarian award from ZAKA, also stopping over at biblical sites.

His miracle crusade in Cali, Colombia in July 2014, was attended by 100,000 people and held in the Estadio Olímpico Pascual Guerrero.

In August 2017, Joshua held a Crusade in Paraguay at Estadio Defensores del Chaco.

His visit caused a media storm when the Paraguayan parliament approved that the cleric be awarded the ‘National Order of Merit’, the country’s highest honour usually reserved only for its own citizens.

Amid a resounding ovation, the Senate of the Dominican Republic conferred its highest awards on Joshua at the end of the first session of a two-day crusade held at the Central Olympic Stadium, Felix Sanchez, located in the nation’s capital of Santo Domingo, on November 24, 2017.

Equally in June 2019, Joshua held a two-day event at the Amphitheatre of Mount Precipice in Nazareth, Israel – the historic hometown of Jesus Christ. An estimated 15,000 travelled from over 50 nations to attend the event, significantly boosting local tourism.

Forbes once estimated that Joshua spent $20 million on education, healthcare and rehabilitation programs for the needy.

On several instances, he had gone to the aid of several communities in distress, notably providing transformers to local communities. He reportedly donated over N26m towards restoring electricity and putting an end to over two years of power outage in four councils in Akoko area of Ondo State.

The cleric additionally made several large donations to the police force in Nigeria, Ghana and Colombia.

The church has a scholarship program which caters to the academic needs of students in their thousands, ranging from primary to tertiary education.

In 2012, Joshua sponsored a Nigerian student doing a PhD in Oxford University, to the tune of £100,000 from the church. He also gave a scholarship to a young Motswana to study at Harvard Law School in America.

He also funded the building and running of a school in Lahore, Pakistan named ‘Emmanuel School’. He also rebuilt a school in a rural area destroyed by the 2016 Ecuador earthquake, travelling to Ecuador for the opening of the school in June 2017.

Joshua was involved in the meeting of the family of the late president of Liberia, Samuel Doe, with the former warlord Prince Yormie Johnson who was responsible for Doe’s death. During this meeting the family publicly forgave Johnson who said it was through Joshua’s prayers that he stopped drinking alcohol and turned to Christianity. The cleric also played a prominent role in reconciling broken homes and restoring families torn apart by false accusations.

He also visited South Sudan in 2019 to broker peace in the war torn area.

In recognition of his humanitarian activities, he was awarded a National Honour by the Nigerian government in 2008 as well as receiving a letter of appreciation from the United Nations.

Outrage as herdsmen kill 11 in Igangan