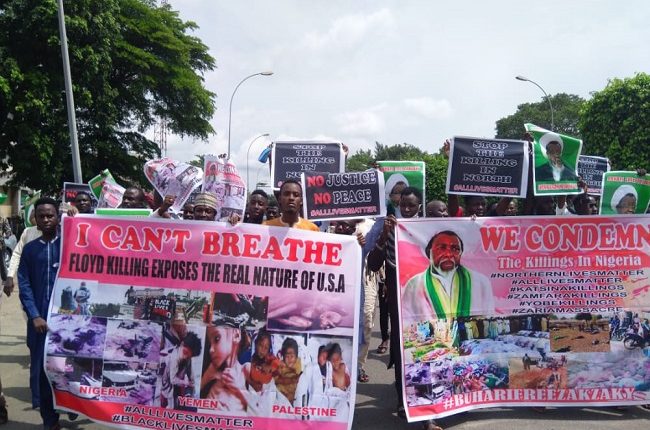 The Islamic Movement of Nigeria (IMN) also known as Shi’ites have protested over the continued killing of innocent citizens in the northern part of the country, and the killing of George Floyd by American policeman.

Shi’ites said as sacred as human life, Nigeria has suddenly been turned into an area of land in which the existence of killing fields causes no sleepless nights for the so-called rulers running its affairs, still less putting an effort to contain the existential menace and nuisance bedevilling it.

This is contained in a statement issued by Abdullahi Musa on behalf of the Academic Forum of the Islamic Movement in Nigeria.

The protest kick-started at the entrance of the Juma’at Mosque opposite Custom head office, Zone 3, Wuse Abuja around 1:45 pm, immediately after the Juma’at prayer. It followed through Sultan Abubakar Way and terminated at Zone 3 junction beside Total Feeling station along Habert Macurly way.

The statement said “the North, in particular, is now either an internment camp or a burial ground; hardly the sunsets or the dawn breaks without the unpleasant tidings of a massive loss of life making the rounds.

“From Boko-Haram in the northeast to banditry in the northwest to kidnapping and cattle rustling in the North Central. The perpetrators get into a village or town, destroy things and steal property without even thinking of getting punished, or having a feeling of guilt at all, about their misdeeds. They wreak whatever havoc of which they had thought in cold blood and with impunity.

“Many a city in the North today has a lot of displaced persons with several schools and uncompleted buildings as camps in which they live in rags and as mendicants.

“What happens to the refugees destroyed and burnt villages? This is such a question that keeps on begging for an answer, and it is not far-fetched for those who are reasonable enough to give an attentive listening ear to what the oppressively imprisoned leader of the Islamic movement in Nigeria, Sheikh Ibraheem el-Zakzaky, exposed almost eight years ago, a video clip is on-going around the social media.

“It is a case of America’s hidden agenda. Already in the open, they create a state of complete confusion and disorder wherever something interested them, and in our own case here in Nigeria they want to pillage mineral resources”.

The IMN further said in 2013, the Sheikh (El-Zakzaky) made known the culprits behind the senseless killings and criminalities in the North in collusion with some unfocused and conscienceless Nigerians, and thus brought to light their plots and targets.

“The tremendous amount of mineral deposits beneath northern earth is what attracted them: there are some gold reserves in Zamfara, gold reserves and other precious stones between Zaria and Birnin Gwari, and the trio of uranium, gold and platinum reserves from Sokoto to Borno.

“If they do not sack the villages in which these reserves are embedded, will they be able to garrison soldiers and start airlifting of the minerals just like that? Therefore, to get what they aim at, they have to displace the persons therein, and this is why Boko-Haram, banditry and kidnapping continue to thrive and keep pestering the areas.

“We continue to demand the immediate and unconditional release of this farsighted leader and his wife, both of whom have been in detention for almost five years running,” the statement added.