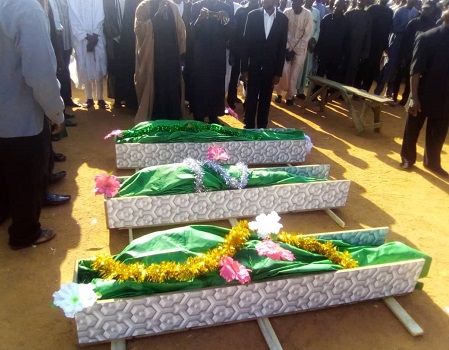 Share
Members of the Islamic Movement in Nigeria (IMN) popularly known as ‘Shi’ites’ on Thursday buried four of their members that were allegedly killed during a clash between them and members of the Police Force as they embarked on Ashura procession last Tuesday in Bauchi.
The procession was disrupted following a clash between the Shiites members who were in their hundreds and men of the Police who fired canisters of teargas to disperse the procession while the sect members tried to resist thereby leading to alleged shotting which led to the death of some of the Shi’ites members while others were injured in the melee.
While speaking with Journalists shortly after the funeral prayers for the deceased held at the Kobi football field in Bauchi metropolis, State Leader of the sect, Malam Ahmad Yusuf Yashi who was represented by one of his disciples, Malam Zilkallaini Aliyu revealed that the slain members were; Uzaifa Adamu, Hussaini Haruna, Uzaifa Sunusi and Ahmed (surname withheld).

ALSO READ: We will reduce maternal mortality by 2022 ― FG

He said that their members were staging a peaceful rally when Police allegedly attacked them shooting and stabbing the demonstrators around Bauchi Central market which resulted to the death of four persons aged between 16 to 20 years.
Yusuf Yashi lamented that if other Muslim sects and faithfuls of other religions could be allowed to practice their faiths without hindrance or molestation of any form by the authorities, Shi’ites members too should also not be persecuted.
According to him, they have been conducting rallies for over 20 years across the country without any form of violence saying that the attack on the members was uncalled for.
It will be recalled that the Nigerian Police had announced that the IMN has been proscribed by the court and therefore banned all street protests by them in recent time.