•He kicked me in the chest, descended on me with punches till I fainted for fighting his mistress —Wife 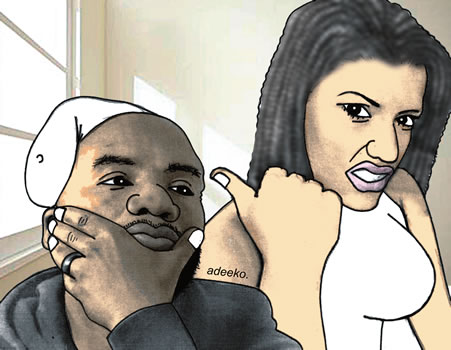 Jelili who brought a divorce suit against his wife before the court stated that she was troublesome, jealous and hot tempered.

He told the court that his wife once went to fight a woman she accused of dating him.

The plaintiff also pleaded with the court to grant him custody of their only child whom he stated was brilliant and would like to monitor her academic activities.

Sadiat accused her husband of battery and violence. She told the court she once fainted after he beat and kicked her on the chest.

She added that at another time, he gripped her neck and attempted to strangle her during a fight.

The court president, Chief Ademola Odunade after listening to both parties observed that their relationship had broken down irretrievably.

Ruling, he pronounced their marriage dissolved.

Odunade gave the defendant custody of their child and instructed the plaintiff to give her N5, 000 monthly as the child’s feeding allowance.

He was also mandated to be in charge of her education and health care.

“Sadiat is ill-natured and finds it difficult to get along with people,” Jelili stated in his evidence.

“She is troublesome and gave me no peace of mind. We fought almost all the time when we were living together.

“Sadiat caused a lot of disaffection between my family, our neighbours and friends because she’s hot tempered. She allowed many issues get out of hand because she lacked wisdom to handle them.

“She is jealous and failed to hide this. She displayed a show of shame when she went to fight a woman whom she accused of dating me.

“They both fought and it took the intervention of people around who restrained both from harming each other,” he stated.

“My lord, I entreat this court to grant me custody of our only child so that I can monitor her education. She is brilliant and her dream is to be a broadcaster. My other children from my first wife have shown interest in guiding her path into this profession.

“In case the court denies me custody of this child, I pray that it rules that Sadiat grants me access to her every two weeks so that I could monitor her progress,” Jelili appeal.

“My lord, Jelili and I have stopped living together as husband and wife since 2013, there is therefore no more intimacy between us. I, hereby, declare before this honourable court that I accede to divorce, “the defendant stated.

“Jelili is out to tarnish my image. I’m neither troublesome nor jealous.

“The woman he mentioned was my friend whom he had an affair with. She had no husband and was living alone.

“I went to confirm from her if the rumour that she was dating my husband was true and she didn’t deny it.

“She expressed shock on learning that Jelili was my husband and apologised to me.

“Jelili refused to talk to me after this and kept to himself.

“He saw an opportunity to beat me when we had a misunderstanding. Jelili gripped my neck, pushed me into the bed and almost strangled me.

“I struggled with him on the bed and after much effort lifted my right hand and hit him in face. He immediately released me because my hand mistakenly hit his eye which was healing.

“He lied to anyone who cared to listen to him that I slapped him.

“At another time I went to see a cousin of mine who was sick. I tried to reach Jelili on phone to inform him of my movement but he missed my call.

“I left a message for him and left. He called me as I was alighting from the motorcycle which took me to my cousin’s house and ordered that I come back home.

“I dashed in to see my cousin and left immediately with a promise to check back on her.

“Jelili never gave me the opportunity to explain myself when I returned home.

“He knew that I feared him and always knelt down to apologise to him any time we had a disagreement.

“Rather than listen to my explanation, he accused me of infidelity. Angry, he grabbed my trouser by the waist and started pulling me with it.

“He hit my head on the wall several times and then kicked me on the chest. I fainted and would have been dead but for the timely intervention of our neighbours who revived me and rushed me to the hospital.

“My lord, I don’t agree that he has our child. It is my duty as a mother to nurture her and I’m not ready to have another  person play my role while I’m still alive,” Sadiat concluded.

I need a son