‘She became a thorn in the flesh after she moved into my house with her 5 children; stole my land documents’

•No one, not even this court can throw me out of his house —Wife 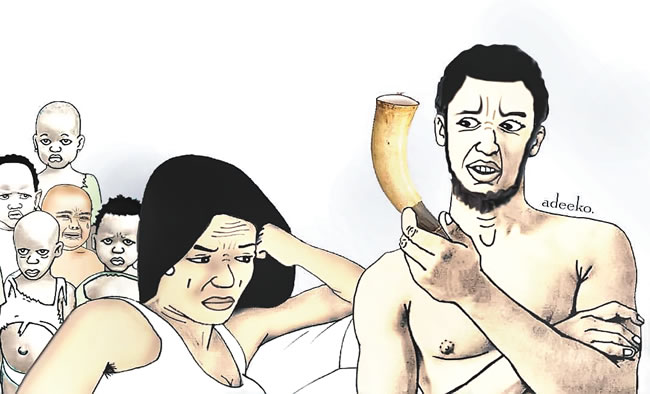 “I insist that she is not my wife. We were just co-habiting. She moved into my house with her five children and made my life miserable.

“She is full of vices. Glory, apart from lying, is dubious. She stole documents of my landed property and refused to return them.”

“He refused to carry out the necessary marriage rites on my behalf. He is diabolic. He would hold a horn and curse me every time we fought. He always threatened that I would share the same fate with his other wives who all died suddenly and prematurely.”

A man, William Edin, had dragged his wife, Glory Edin, before Oja Oba/ Mapo Court C Customary Court, Mapo, Ibadan, Oyo State, seeking that it brought to an end the six-year-old relationship between him and his wife.

William who initially refused to acknowledge that Glory was his wife told the court that he carried out no marital rite on her and that they never had children together.

According to him, the six years he lived with Glory was filled with distress and regret because she was not a straight person.

The plaintiff told the court that his wife was irresponsible and that she stopped cooking for him more than a year ago. He added that she was a liar and that he stole the documents of the land he bought from her friend’s husband.

William further stated that he moved out of their apartment because Glory made his life miserable.

He thus pleaded with the court to stop their relationship and rule that Glory return his document to him and move out of his apartment.

Glory gave her consent to divorce stating that she already had enough of William’s atrocities.

The defendant explained that the plaintiff insisted that she left her trade and forced her to sell alcoholic drinks.

Glory added that William refused to carry out the expected marriage rites on her behalf adding that they never planned to have children in their marriage.

She also stated that he employed a prostitute who humiliated her twice by slapping her.

The defendant further said that the plaintiff was always using a horn to curse her any time there was a misunderstanding between them.

Giving his judgment, the court president, Chief Ademola Odunade observed that there was no more love between them.

Ruling, he dissolved their marriage and admonished both to maintain peace.

He ordered the defendant to move out of the plaintiff’s house while the plaintiff should give her N3,000 to pack her belongings.

The plaintiff was further mandated to give the defendant N12, 000 as one year rent for a new apartment.

“My lord, I’m stating clearly before this court that this woman whom I dragged to court is not my wife. We are not married but just co-habiting.

“I never carried out any marriage rite on her behalf. She moved into my apartment with the five children she had for her late husband and turned my life upside down.

“She became a thorn in my flesh and wanted to send me to my early grave.

“I discovered after we started living together that she was a liar. Glory found it convenient lying and she never showed any sign of remorse even when caught.

“She was also stubborn and never took to correction. She not only fought me, but extended her hostility to members of my family our even our neighbours.

“I established her in different businesses but all went bankrupt. I felt bad seeing my hard earned money go down the drain but she was unperturbed.

“I invited her to join me in my business but she made a mess of it. Glory is dubious. She cheated me of the proceeds from our business.

“She took my N100, 000 without my consent and has not returned it till date,” William stated.

He added that “Glory was always collecting food allowance from me but she refused to cook.

“My lord, Glory and I lived like cat and mouse for the years we were together.

“She stole the documents of my landed property but denied it was with her.

“I got frustrated and moved out of our apartment and we have been living separately since then.

“I have gone through hell living with Glory. I, therefore, pray this court to stop our relationship and order her to move out of my apartment.

“I also entreat the court to help retrieve my documents from her, “the defendant said.

“William is a liar and all liars will end in the lake of fire, “Glory stated.

“William promised me heaven and earth when we met. He told me he would help me take care of my five children but he reneged on his promise.

“I was doing well as a hair dresser when we met and had seven apprentices. He insisted I abandon this trade and go into trade I wasn’t familiar with nor comfortable with. He told me to start selling beer.

“He employed a prostitute who was very rude and always fighting me. She slapped me on two different occasions and my husband did nothing about it.

“The relationship between my husband and I stated turning sour as a result of this.

“I told him I was no longer interested in the beer business but he refused that I carry my stock out of the warehouse.

“My husband always threatened that I would share the same fate with his other wives who died prematurely.

“William is diabolic. He would bring out a horn and curse me anytime we had a disagreement.

“He moved to his other flat when we fought and refused to move back. He stopped giving me feeding allowance and insisted I move out of his apartment.

“My lord, I have told him he’s joking. No one, not even this court can throw me out of that apartment.

“William is just trying to play smart. Our differences can only be resolved by our family members and this will be in our village,” she concluded.

The color of my urine