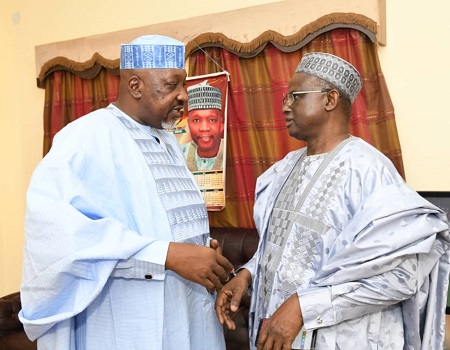 Political office holders in the country have been charged to be accountable to the people of their respective states in order for democracy to thrive and grow to an enviable position.

The charge was given by the Secretary to the Government of Federation (SGF), Boss Mustapha in a remark he gave during the opening of a two-day retreat for soon to be constituted members of the State Executive Council (SEC) in Gombe state on Monday.

The SGF said that the training which is a follow up to the retreat conducted by President Muhammadu Buhari’s administration for political appointees’ would help in ensuring inter-governmental collaboration for national unity and development.

Boss Mustapha added that “This call to service requires all of you to fully share in the governor’s vision and agenda for the state. As members of the governor’s team, it beholds on you to join him in providing the leadership required to develop the state and lift the people out of poverty”.

In his keynote address, Gombe State Governor, Muhammadu Inuwa Yahaya, tasked the incoming members of the SEC to be up and doing in order to ensure and promote effective governance in the state.

He stressed that: “You were selected because of our fame conviction that your wealth of experience is such that will make you offer honest and sincere advice that will be used in promoting effective governance”.

“You should, therefore, be focused in the discharge of your duties bearing in mind the priorities of the government. You are also to ensure that agencies under your ministries are effective, efficient and prudent in the discharge of their responsibilities,” the Governor added.

He added saying that: “As for the Permanent Secretaries, you are the brain-box of governance, you are the technocrats charged with the responsibilities of guiding political leaders in ensuring that rules of governance are strictly adhered to”.

While urging the appointees to put in their best efforts in addressing numerous challenges bedevilling development of the state, the Governor explained that Gombe state more than ever before needs committed and dedicated managers to handle the tasks at hand.

He said: “You are aware that we inherited an unimaginable financial burden, decayed infrastructure, comatose civil service, restive youths, dejected retirees and demoralized traditional institution among others. The solution to our problem lays in our hands and we should be up and doing in other to face the challenges squally,”.

On his part former Governor of Gombe state, Senator Muhammad Danjuma Goje, who doubled as Chairman of the retreat which has as theme: ‘Together we can’ is timely and would be effective in ensuring dividends of democracy to the electorate.

He, however, urged the Commissioners – designate and other appointees to be loyal and work for the success of the administration led by the All Progressives Congress (APC) in the state.

Be part of govt’s initiatives to protect environment- NASFAT Chief