Sexual assault: Uproar as CAN declares support for Biodun Fatoyinbo during visit to COZA + VIDEO 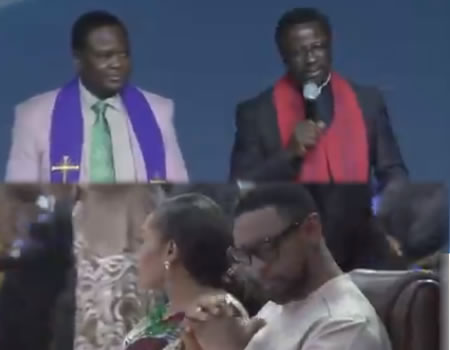 Share
Amid controversies generated as a result of the rape allegation levelled against the Senior Pastor of Commonwealth of Zion Assembly (COZA), Pastor Biodun Fatoyinbo, the Federal Capital Territory (FCT) wing of the Christian Association of Nigeria (CAN) and the North Central Chapter of CAN had pledge their support for the embattled pastor.
This action did not go down well with a lot Nigerians, as they queried why CAN would support a man who has not defended himself from the rape allegation levelled against him.
Recall that the President of CAN Reverend Dr Samson Ayokunle in a statement condemned any case of rape and said the Christian apex body would investigate the allegation.

However, while addressing the congregation at COZA the FCT and North Central CAN said they would stand by Pastor Fatoyinbo at this critical time and also continue praying for him.
Recall that Busola Dakolo, wife of a popular musician, Timi Dakolo had alleged that Pastor Fatoyinbo raped her as a teenager 20 years ago.
After the allegation was made, a lot of Nigerian embarked on a protest, calling on Pastor Fatoyinbo to step down from the pulpit for a proper investigation to be conducted by the Police.
Addressing the congregation at COZA, the FCT CAN Chairman, Reverend Jonah Samson said “It’s a pleasure being here and I assure you that we are with you and we will continue to be with you. We are in support of the church. We are in support of your pastor. We stand by him and this church will continue to march forward. I say and I declare, the gates of hell shall not prevail in any church in the mighty name of Jesus. Amen.”
Also, the North Central CAN Chairman, Reverend Dr Israel Akanji said “I could have been living in Nasarawa State, Benue, Kwara, Kogi, Niger or Plateau. I could have been chairman living in any of those places, but by God’s mercy, I am presently living in Abuja.
“How can I and then the FCT (CAN) chairman hear that one church that God has a plan and purpose for is going through this Jerusalem-Jericho road and then we will walk and walk away? We will not do such a thing. We are here to just let you know, as he said, we are with you in prayer.
“The Lord will bring you out even stronger. Our pastor here, by the grace of God, will continue to be the voice of God to proclaim (to) the whole nations of the world the mysteries of Jesus Christ. So, we pray that the Lord will stand by you and we want you to know that you are not alone. You have many brothers and sisters that are praying for you.”

So CAN representatives went to COZA to show support for Biodun Fatoyinbo yesterday. Nigeria really is a “special” country lol pic.twitter.com/03ELk13XtP

As this report is being filed, a lot of criticisms is still trailing the support from the FCT and North Central CAN Chairmen to the embattled Senior Pastor of COZA, Fatoyinbo.

Sesay’s book on Chibok girls a misrepresentation of fact ― Presidency

Easter: Be transparent in identifying poor for palliatives, CAN charges govt