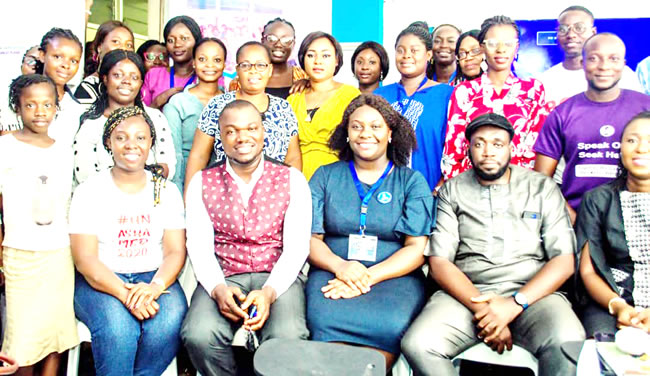 Sexual and domestic violence are increasingly becoming rampant in Nigeria, with young girls and women bearing the brunt of the crime. According to a report by the National Bureau of Statistics (NBS), 3,443 cases of rape assaults were reported in the country in 2017 with no conviction by the police.

These dismal indices made the BBC News in its June 2020 article, titled: ‘#WeAreTired: Nigerian women speak out over wave of violence’, to report that, “In Nigeria, it is not uncommon for rape to go unreported.”

Recently, a group of women advocates, sexual and domestic violence survivors, and legal and medical experts convened in Ibadan on the occasion of the fourth edition of the Women Safe House Sustenance Initiative biannual programme themed: ‘Fearless’. Supported by the International Centre for Women Playwright, Afrab Chem, Asido Foundation, The Shade of Women Foundation, among others. The event featured short movies and documentaries on rape and domestic violence. It also featured free trauma therapy, medical and legal sessions.

Barrister Wuraoluwa Ayodele, the convener of the event and the founder of Women Safe House,  stated that the essence of the event was to ensure that the culture of silence among women and young girls who are suffering abuse is broken.

“The truth is that, a lot of abuse is deeply rooted in culture and religion. Today, we want to tell domestic violence victims and survivors that they are strong,” Ayodele said. “The goal is to bring women together to share their stories of sexual and other domestic violence. There is no shame in anything. And one thing is unique about these women—they have been able to overcome these depressing experiences and are now living a better life than they had before.”

During the storytelling session, a point in the programme where victims of sexual or domestic abuse were allowed to tell their stories, two women, Busayo Ilori and Adebola Ajao, shared their experiences with the audience.

Ilori, a mother of four children, lamented that she came from a broken home, and that she got married after her OND because she needed a man to take care of her. Unfortunately, with time, her husband, who was kind and supportive at first, became abusive to the point she had to leave his house with her children. “Since I left him with my children, I’ve been happy. I now have rest of mind,” she said.

Ajao, a rape survivor, spoke about how she was sexually abused on two different occasions by friends she trusted. She narrated that the ordeal  was so depressing whenever she remembered  it, but that she is getting better and stronger since she sought help from professional counsellors. “The flashbacks will come, but you should encourage yourself and don’t give up,” she advised.

Reacting to the contributions and comments, Omowumi Okedare, of the College of Medicine, University of Ibadan and a women’s advocate, stated that the survivors’ stories and experiences were valid. She further stated that when people hear about abuse, they think it is just about slapping, beating or hitting the victim, but that it goes beyond that, to the psychological and mental health of the victim and their families.

“There are different forms of abuse. Financial abuse is common,” she said. On the way forward, she  said, “You all can help by speaking up and saying no to abuse. Violence is a criminal offence; and you have a choice to live.”

Dr Adetoun Faloye, a psychiatrist with the University College Hospital (UCH), Ibadan, and also the Deputy Director of Women’s Mental Health at the Asido Foundation, gave a short talk on trauma recovery. She noted that some women live their lives not wanting to live the kind of lives their mothers lived, but that this is wrong because they are different entities from their mothers.

“Abuse doesn’t hide itself, but you don’t just know what it means when it’s presenting itself,” Faloye said. “If you’re going through abuse or violence, you need to call it what it is. Healing comes from accepting responsibility for your mistakes. Part of the healing and recovery from domestic violence comes from getting justice for the victim.”

Omobolanle Adedeji, the Programme Officer of Shade of Women Foundation, spoke on the signs of domestic violence. She stressed that some of the weapons of the abuser is isolation, reduction of self-esteem, withdrawing of support system, use of religion and culture, among others.

“Isolation looks like love in courtship. You need to open your eyes and see the signs nature is showing you,” Adedeji advised. “Once you’re a victim of domestic violence, you can’t pray, love or wish it away. You need to seek professional help.”

Aroniyiaso Oladipupo, a psychologist and a research student, spoke on remedies and mental care for domestic violence victims and survivors. He emphasised that victims of such vices should seek professional help from the right sources. He stated that one of the ways of avoiding being a victim of rape or violence is by not trusting to much or giving people unnecessary benefit of doubt.

“You should know the difference between love and lust. Don’t love with your mind covered, and don’t get carried away with everything you see,” Oladipupo stressed. “Invest in yourself—when you do, your esteem and worth will increase.”

Barrister Dolapo Olajuyigbe spoke on legal remedies for victims of abuse and domestic violence. He advised that it is better to stay away from an abusive relationship or home than to die in it. He said that, while there were  many legal options for women experiencing abuse in their relationships or marriages, there are two major ones he could recommend.

“If you’re not married, get out of the relationship. If you’re married, leave that home and go somewhere that is safe for the moment,” he advised. “If children are involved, you can go to the children court and address the matter there.”

While delivering the closing remarks, Ayodele noted that if any form of domestic violence or abuse has not happened to someone, the person would not understand how it feels to be a victim or a survivor of these vices.

“Abuse grows in silence. When we speak against it, it disappears,” Ayodele charged. “We must not wait until it gets to all of us before we speak. We must rise up and use our voices to fight these vices in the society.”