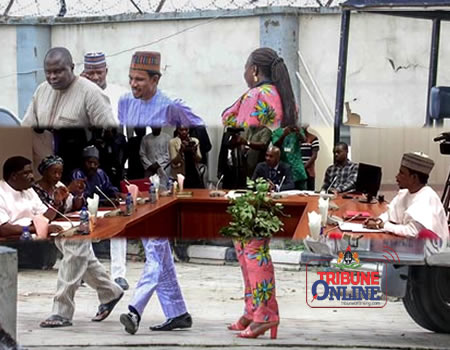 The Senate has approved a one-week extension to the committee investigating alleged assault by Senator Elisha Agbo from Taraba state on a nursing mother at an adult toy shop in Abuja.

The extension was approved following a request by the Chairman of the committee, Senator Samuel Egwu (Ebonyi North)  who informed the Senate that the committee has met a brick wall on its investigation.

The former Ebonyi state governor said the embattled Senator Abbo told the Committee that he was constrained to speak on the alleged assault case since it was in Court.

Senator Egwu further told his colleagues that the Commissioner of Police, Federal Capital Territory Command,  Adamu Ciroma equally declined to speak on the matter as he said the matter was sub-judice.

He equally revealed that the victim of the alleged assault and owner of the shops declined the Committee invitation.
He said:” I am standing here as chairman of that committee. To seek for additional time to submit our report.
“Because of the sensitivity of the work of this committee and the incident, the interest of our members and even the public to know whatever happened we ask for this extension.

“Mr President,  we set out to do this investigation and we invited all the people that are involved. We invited firstly our colleague.

“In the course of our interaction, he made it clear to us that he has been invited by the police where he was detained for 24 hours and thereafter charged to court.

“The case is already in Court and it is sub-judiced. He cannot go ahead and give us any information in order not to be sub-judiced.

“Thereafter,  we invited the police and the Commissioner of Police of Abuja, who came and told us the Inspector General of Police asked him to investigate the matter.

“He also went ahead to tell us that the case is in court and sub-judiced. Therefore, he cannot give us further details.

“After that, we also invited the lawyer to the victim who also repeated the same matter. We tried to reach the victim herself and equally the shop owner,  they never showed up.

Senator Egwu requested for extension of time, pending when the Police would have concluded its case.  He was however interjected by the President of the Senate who said the Senate was investigation Senator Abbo for alleged misconduct, not pursuing a criminal case.

“Let me clarify this. We are investigating misconduct, not a criminal act. We can’t wait until the police finish its court case.
“The Senate is not investigating what the Police is investigating. The Senator who raised a point of order came underprivileged.

“This privileged is about the Senator‘s misconduct that could be attributed to everybody as a Senator or the entire Senate.

” So what you are asking for is an extension of time. We cannot go and sit until the police finish their investigation.  What they are investigating is maybe something criminal in nature.

“We will give you an extension of time but we cannot stop our activities until the police finish its court case. “

The committee was inaugurated two weeks ago and was expected to make its presentation this week before it sought for the extension.