•As lack of political will by LGAs is militating against fight 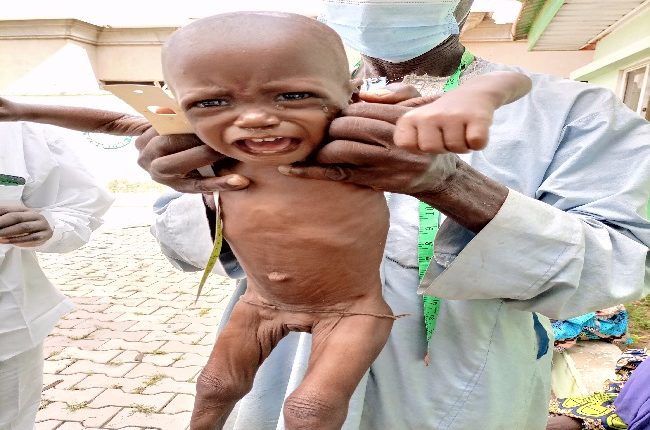 Statistics obtained from the Bauchi State Primary Health Care Development Agency (BASPHCDA) has revealed that not fewer than 21 children have died of Severe Acute Malnutrition (SAM) between January and August 2020 majorly due to the stock-out of Ready-to-use-therapeutic-food (RUTF) used for the treatment of SAM in malnourished children.

According to the statistics made available by the Deputy State Nutrition Officer, Abubakar Saleh, a total of 8510 New SAM cases were recorded during the period under review out of which number 4384 were treated, Cured and discharged just as 241 Defaulted in receiving treatment as they stopped coming to the various designated CMAM centres for RUTF and 36 were regarded as Non recovered while  50 were Transferred out of the CMAM centres for further treatment.

He explained that the review covered all of the CMAM centres in the 9 LGAs of the state where the malnourished children are taken to for attention.

Meanwhile, Lack of political will by local government areas has been identified as the major problem militating against the fight against severe acute malnutrition in Bauchi state as it takes a long time before the LGAs make arrangements to convey their allotted ready-to-use-therapeutic-food (RUTF) to the various CMAM centres.

An investigation by our Correspondent revealed that though the state government in conjunction with UNICEF spent the sum of N20m to procure 2,500 cartons of RUTF which is laying unclaimed at the store of the State Primary Health Care Development Agency (BASPHCDA), the affected local government areas have refused to pick up the commodity for distribution to the CMAM centres.

A visit to one of the CMAM centres in situated at the Kirfi PHC revealed that the facility was out of stock of RUTF for about 4 weeks a development that actually brought a setback to the recovery of the clients thereby increasing the severity of Acute Malnutrition in the area.

Checks further revealed that the facility is being accessed by clients from neighbouring LGAs of Alkaleri, Bauchi and Tafawa Balewa receiving between 100 and 120 clients every clinic day with all of them going back empty-handed in the last four weeks.

Ado Muhammad Manga is the Nutrition Officer in charge of the PHC and he lamented the out of the stock situation of RUTF in the facility describing the development as most of unfortunate as they had no option but to send the clients back without the commodity.

He lamented that the out of the stock situation of the RUTF is causing relapse in the clients thereby slowing down the recovery process disclosing that as of the time of the visit to the facility, the local government nutrition officer had not gone to Bauchi to convey the RUTF meant for the area.

ALSO READ: Today, the destiny of Edo State will not be in the hands of politicians

Some of the mothers of the victims who spoke lamented the out of the stock situation of RUTF saying that it has negatively affected their children by slowing down their recovery processes appealing for quick intervention by the government.

Asked what they are doing to supplement the treatment process in the absence of RUTF, most of them complained of lack of money with which to buy the local ingredients needed to mix local food supplements in the place of RUTF appealing for assistance from the government in that direction.

While reacting to the development, Executive Chairman of Bauchi State Primary Health Care Development Agency (BASPHCDA), Dr Rilwanu Mohammed lamented the attitude of the local government saying that they must find a way out of the situation to convey the commodities from Bauchi to the CMAM centres.

Rilwanu Mohammed said that the RUTF was supplied by UNICEF following the payment of the sum of N20m as counterpart funds by the State Government earlier in the year expressing optimism that before the present supply runs out of stock more funds will be released.

At the Ministry for Local Government and Chieftaincy Affairs when our Correspondent visited, the Director in charge of local government affairs was said to be out of town on official assignment and he is the only officer competent to make comments on the development.

The fears expressed by most of the women is how to handle the treatment of Acute Malnutrition in the post-pandemic era considering the fact that getting RUTF regularly is now becoming a major problem coupled with the fact that most of the victims do not have the financial strength to procure items needed for local substitute of the RUTF.
NIGERIAN TRIBUNE