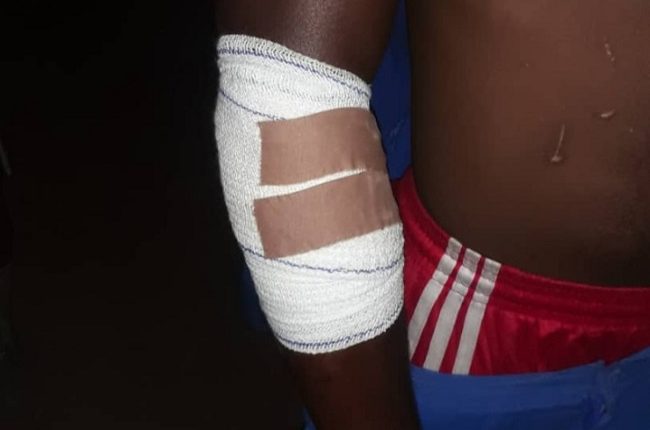 Consequently, some of the marshalls have been detained at the Utako Police Station while the injured workers were being treated at the Maitama General Hospital.

The staff of G-Complex Construction Limited who spoke with reporters alleged they were brutalised at Gwarimpa Junction in the FCT because they could not produce evidence of paying N35,000 vehicle permit.

In addition to the brutalisation, their operational vehicles that were vandalised and impounded were seen parked at the within the premises of the police station.

“I was called by the driver of this pick-up that on his way to convey materials and take staff from Idu to our yard in Jabi that hoodlums blocked him at Gwarimpa junction and demanded that he should provide daily receipt of Abuja Municipal Area Council and he said he works for a construction company and there is no need for him to have such receipt.

“From that point, these people insisted that it is either he pays the money or they will confiscate his vehicle and because they are in large number, he succumbed that he would pay the money.

“They demanded N200 and as soon as he brought the money out to pay, they demanded the particulars of the vehicle. As soon as he showed them, they said the car does not have a sticker which they said is being sold for N35,000.

“So he was now forced to call superior officers of the company but before they could get to him, the AMAC officials had towed the vehicle to their office in Jabi.”

He lamented that when senior staff of the company arrived at the AMAC office to find why the vehicles were impounded, they were attacked by the revenue collectors.

“The moment they saw the company staff coming, they started harassing them. They used cutlass to cut seven of our workers. Some had machete cuts on their heads; others had their hands chopped off.

“Luckily for us, there was a police team on patrol that went there to intervene and helped to bring the vehicles here.
However, Head of Operations, AMAC Task Force on Haulage, Light and Heavy-Duty Vehicles, Douglas Badi in his reaction said the construction workers attacked his men first.

“When the driver was brought to the office, I told him he should not park as I didn’t want a situation where you’ll start having physical contact.

“I sat with some of our staff and I saw some boys numbering about 30, they were coming from the other side of the road where their vehicles were parked.

“We now sent two of our staff to the other side to do surveillance there. We traced them there and when we saw them, we asked the security to detain them.

“We came back to this place and the next thing we saw was that one of their staff struck our staff with a shovel on the face and on his hand.

“Right now, the doctors at the Gwarinpa General Hospital are going to carry out a major corrective surgery on his hand because the thing affected his vein that he cannot move his hand.

“When this happened, we held their boys and, in the process, the police said we should tow the Hilux vehicle because we deflated the tyres.”

FCT Police Public Relations Officer (PPRO), DSP Mariam Yusuf in a chat with our reporter confirmed the incident, saying the investigation was going on.

My political journey has been full of bumps, pitfalls, triumphs ― Ohakim