Sessions confirmed as U.S. attorney general after battle with Democrats 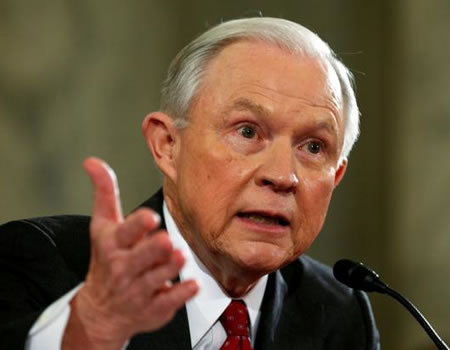 A bitterly divided U.S. Senate confirmed Republican Senator Jeff Sessions on Wednesday as the next attorney general of the United States after strong pushback from Democrats concerned about his record on civil rights.

Sessions, 70, who has served two decades in the Senate from Alabama, was confirmed by a 52-47 vote largely along party lines after Democrats raised public opposition to his confirmation.

In a rare move for a senator recently confirmed to a Cabinet position, Sessions took to the floor of the chamber after the vote and called for members of Congress to have some “latitude” in their relationships with members of the other party.

“I want to thank those who after it all found sufficient confidence to confirm me as the next attorney general,” Sessions said.

“Denigrating people who disagree with us, I think, is not a healthy trend for our body,” he said, referring to the Senate.

On Tuesday, Democratic Senator Elizabeth Warren, a darling of the political left, was silenced in the Senate for reading a 1986 letter from Coretta Scott King, the widow of the Rev. Martin Luther King Jr, that criticized Sessions for his civil rights record.

According to Reuters, Democrats, civil rights and immigration groups have voiced alarm about Sessions’ record of controversial positions on race, immigration and criminal justice reform.

With Sessions as attorney general, eight of President Donald Trump’s 22 Cabinet nominees have been confirmed.

Sessions, a known immigration hardliner, will take the lead of the Justice Department as its lawyers are defending Trump’s temporary entry ban on people from seven predominantly Muslim countries and all refugees, the most controversial executive order of the young administration.

The 9th U.S. Circuit Court of Appeals is due to rule this week on whether to overrule a district court judge in Seattle who suspended the ban last week.

Civil rights groups worry that the Justice Department’s civil rights division will not be aggressive in prosecuting abuses under Sessions.

They cite his failure to win Senate confirmation to become a federal judge in 1986 because of allegations he made racist remarks, including testimony that he had called an African-American prosecutor “boy,” an allegation Sessions denied.

Sessions said at his hearing in 1986 that groups such as the National Association for the Advancement of Colored People and the American Civil Liberties Union could be considered “un-American.” He also acknowledged he had called the Voting Rights Act of 1965 a “piece of intrusive legislation.”

The left-leaning Center for American Progress think tank questioned whether Sessions would be an independent legal voice to challenge Trump’s agenda.

“Trump has shown little respect for the courts or the constitutional limits on his power, and there is no reason to think that Attorney General Sessions will act as an independent check on the president,” said Michele Jawando, vice president for legal progress at the think tank.

Sessions has pushed to curb immigration into the United States, including by those who enter legally on work permits. He has also voted against many measures to reduce sentences for prisoners.

The Republican National Committee pushed back against what it called “obstructing” by Democrats. “That Democrats would try to skew Sessions’ strong civil rights record and consistent adherence to rule of law in a partisan effort to block their colleague’s nomination shows their only commitment is to blindly obstructing this administration,” Republican National Committee Chairwoman Ronna McDaniel said on Sessions’ confirmation.