Serve to Be Great: Leadership Lessons from a Prison, a Monastery, and a Boardroom 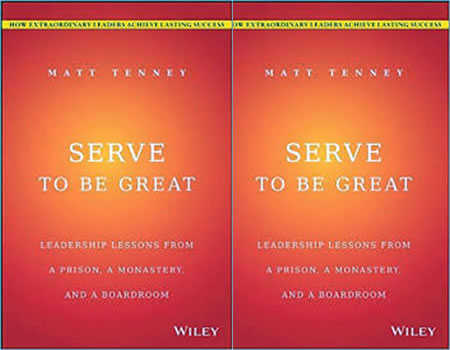 This book is about a re-orientation toward service leadership, which, while not especially radical advice for leaders, is certainly an important principle to remember.

The book’s first section recounts Tenney’s ill-advised attempt to defraud the U.S. military of millions of dollars and his eventual capture and incarceration. He doesn’t give much of an explanation for this near-disastrous decision, other than his hankering for “achieving financial freedom” , a goal that seems tough for Tenney to relinquish, even after six years in the brig.

At some point during his imprisonment, Tenney literally decides to “C’mon, get happy.” “I decided that it must be possible to be just as happy in the brig as I could be anyplace else” , he says. The tool for this transformation? Mindfulness! “Awareness training sets us free from the pull of our comparative thinking,” he continues.

Tenney frames his mindset this way: “Imagine that you are in a brig cell sitting on your bed. You are not in any pain, you are not hungry, and the temperature is comfortable. If you’re not comparing that moment to the memories of the past, or the hopes of the future, what’s wrong with that moment? Nothing.”

Nothing indeed, as long as you don’t have cause to fear being shivved in the yard or have a family outside the brig dependent on your financial support. For most of his prison term, Tenney had a fairly cushy gig (by prison standards). He writes, “We went to work each day as most people do. In our free time, we had access to books, magazines, music, television, movies, and games.”

Truth be told, Serve to Be Great isn’t really much about mindfulness anyway, other than Tenney’s assertion that “It worked for me, and it will work for you.” His link to mindfulness in the book is ultimately indirect – it’s more of a general application of the importance of staying centered, present, and focused on others.

Part I of the book, entitled My Journey from Prisoner to Monk to Social Entrepreneur, ought to be re-titled The Semi-Charmed Life of Matt Tenney. Tenney leaves prison after almost six years and moves to Mexico (probably not a bad idea), where he finds work as an English teacher in an orphanage. Miraculously, he lands squarely on his feet. “Despite having a felony on my record, job and business opportunities have seemed to come very easily. It seems that most people I meet offer to help me once it becomes clear to them that my focus in life is helping others”.

Part II of the book – which is much stronger than the first — presents an analysis of a variety of businesses that have leaders with a strong service orientation and the innovative programs they establish for their employees. Some of these case studies, especially that of Nextjump, and the lessons imbedded in them are quite interesting and potentially useful. For instance, Nextjump has a laser-like focus not only on hiring talented people, but also those who fit into their corporate culture.

The lessons aren’t always transferable, though; some of these companies are extremely well-resourced, a fact reflected by their generous and creative employee benefit programs. Tenney wisely places the emphasis on dispositions, mindsets, and values rather than dollars, perks, and benefits, but still it’s sometimes hard to find inspiration in less expensive suggestions like “starting a leadership library.” I want the in-house sushi bar and free laundry service!

Throughout, Tenney is nothing if not a true believer. The stories he tells of corporations and their innovative and compassionate leaders are heartwarming and run counter to the standard notion of unfeeling bureaucracies that care only about the bottom line.

Tenney argues effectively that the “spirit of serving and caring for others is universal in nature. It doesn’t end where we encounter the borders defining our team. When we value and nurture this spirit of service, it gradually starts to expand quite naturally to include anyone we encounter who is in need of help …” It’s hard to debate that.

Why leaders should not manage their own milestone processes

Leaders and law of gravity