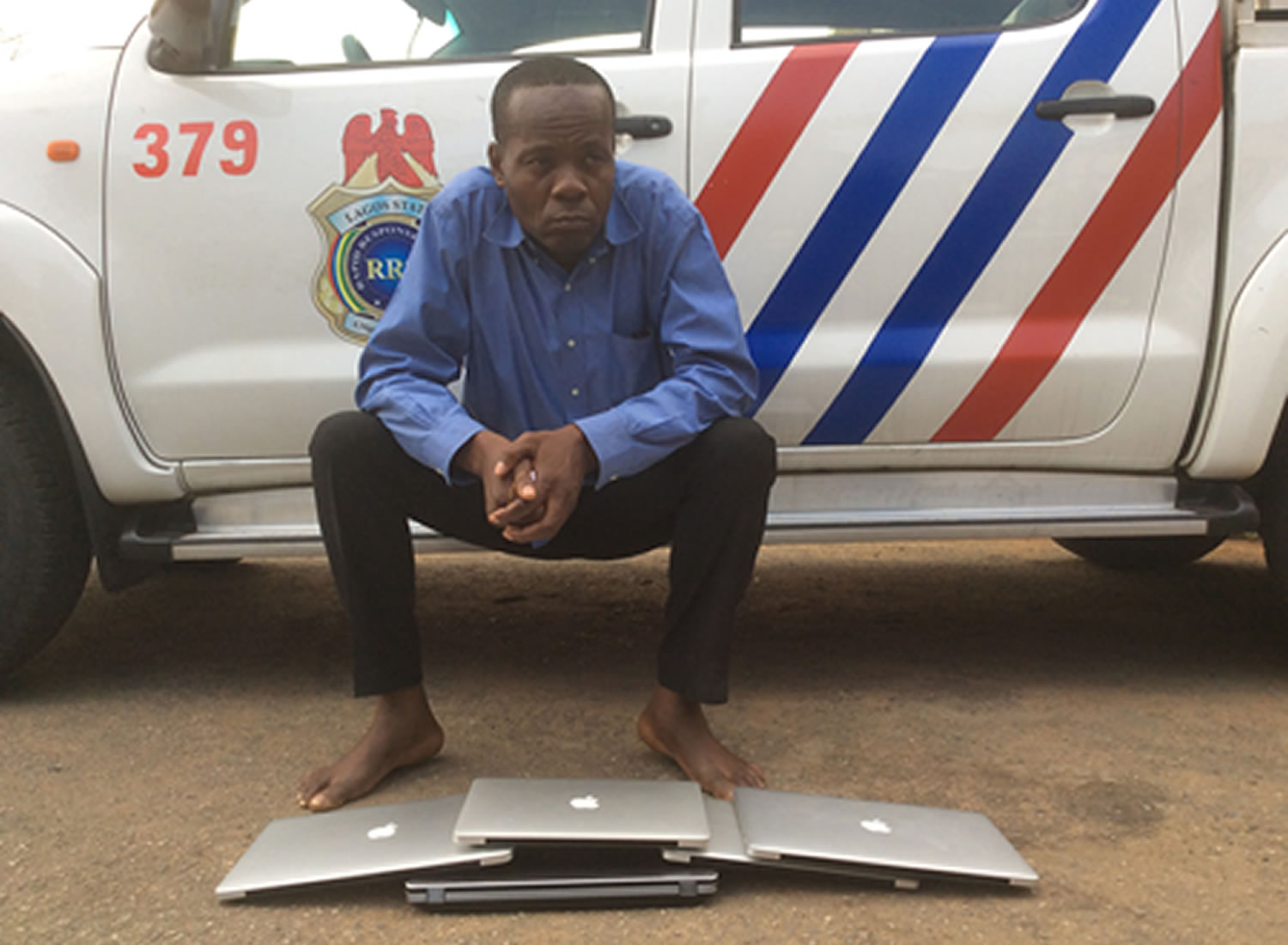 A forty seven-year -old serial thief ,who targeted seminars and conferences to steal computers  and alied products  has been arrested during a church house fellowship programme.

The susoect, Ikemefuna Aje, was a few days ago arrested by operatives of the Rapid Response Squad ,who tracked him to his house at 5 Tony  Street in Ejigbo area of the state .

The suspect had reportedly in the past invaded seminars and conferences,when participants were having their lunch or tea break and made away with their laptops  and other things.

It was gathered that the suspect was hosting his church’s house fellowship in his house with about thirty four members,when he was arrested by the police .

The suspect had gate-crashed into a seminar organised for internet brand managers at a popular hotel in GRA, Ikeja, Lagos.

He made away with 5 MacBooks, one HP computer and some assorted personal effects of the workshop participants.

Ikemufuna, captured in the CCTV camera around the venue of the event, drove into the venue, before heading straight into seminar precisely when the participants were having launch in another room.

The suspect, who was corporately dressed, wore the tag of seminar participants before making away with the items.

He had after stealing the said items, taken them to computer village, Ikeja and sold 5 Mac Books and one HP computer to one Saliu Ibraheem for N1, 110, 000:00.

RRS operatives in tracking the suspect traced him to 5, Tony Street, Ejigbo, Lagos where he was hosting about 34 other church members in a house – fellowship.

Recovered from his house after the arrest were a car a 4Runner Toyota, with the registration No. KRD 701 DC, driven into the venue by the suspect, a master key, Zinox laptop, several computer bags, computer and tablet accessories as well as seminar materials and a sum of N700, 000:00.

According to one the representatives the  organiser of the seminar , who did not want her name in print, “we were shocked to see participants bringing up issues of missing laptops and computer accessories after returning from lunch.”

He added that ” The seminar was not advertised online neither in any national newspapers. How did this suspect get to know of the event and managed to come at the exact time participants about a hundred participants were having launch?”

The suspect had several scouts who furnished him with information on conferences and seminars, where he went to steal laptops and participants properties.

The suspect confessed to the police that he gate crashed into the venues of seminar and conferences, which was one of many others, before stealthily making away with several laptops, mobile phones and computer accessories of participants.

The suspect, after initially denying the crime, confessed when he was shown copy of the CCTV footages before leading the operatives to Computer Village to arrest the buyer.

According to the buyer of the stolen items at the Computer Village, Ikeja, Saliu Ibraheem, “I have known Ikemefuna for more than seven years. He brought 5 Mac Books and one HP to my shop that he bought them in South Africa.

As at yesterday, the operatives had recovered all the laptops allegedly stolen by the suspect at the seminar.

The image maker in charge of the state police command, Olarinde Famous-Cole confirmed the arrest of the suspect to Metro.

He also added that the suspect had been transferred to Criminal Investigations Department of the state police command.

OYSG to start prosecution of herdsmen with guns