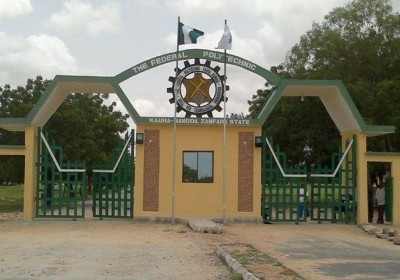 The Senior Staff Association of Nigeria(SSAN), Federal Polytechnic, Kauran Namoda in Zamfara state has raised an alarm that the management of the school had been issuing fake results to graduating  HND students of Maths and Computer department going to the National Youths Service Corps (NYSC).

This was disclosed by the Chairman of the SSAN, Comrade Hussaini Yusuf Gwandu shortly after an emergency meeting of the union where it passed a vote of no confidence on the management of the polytechnic in Kauran Namoda on Saturday.
Gwandu told newsmen that ‘when I came on board, I realised that the results the management issued to the graduating students is different from the course we run in the polytechnic.
He said, ‘we have Maths and Computer science but for three years the students were issued with Maths and Statistics results.
According to him, ‘ after the affected students complete the one year service, the management of the polytechnic will now retrieve the results.
“There is no way the school authority can fault our claim as we are not only in possession of evidence but we are part of the polytechnic community, he stressed.”
Gwandu maintained that ‘we told the management it was not proper because the students ought to be given maths and computer science results instead.
He blamed the management for its failure to get the maths and computer science accredited by the National Board for Technical Education (NBTE).
“We run   17 courses in the polytechnic. Three of the courses are not accredited and these courses are maths and computer science, public administration and Building technology.”
When contacted, the Deputy Rector of the Polytechnic, Ahmad Muhammad Gusau who spoke on behalf of the management denied that fake results are being issued to the students.
The deputy rector said the management is aware of a petition to the Minister as well as to the governing Council of the Polytechnic over the issue, pointing out, ‘We can not say any until the investigation is concluded.