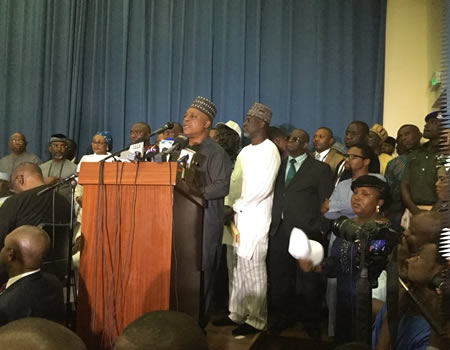 Senator Philip Gyunka (PDP-Nasarawa), on Tuesday, hailed the alliance of 39 political parties ahead of 2019 general elections, saying it was “a welcome development”.

The political parties, including the Peoples Democratic Party (PDP) and Social Democratic Party (SDP) on Monday, signed a Memorandum of Understanding (MoU) to work together to remove ruling All Progressives Congress (APC) from power.

The coalition, which also has the Reformed All Progressives Congress (R-APC), a splinter from APC, said it would form a government of national unity in 2019.

Gyunka told News Agency of Nigeria (NAN) in Abuja that the fears being expressed in certain quarters that the coalition would not achieve result were misplaced.

He said, “the people are tired of the government of the day. I am very optimistic that this coalition will endure; after all, it is the same coalition that brought the current government into power in 2015.

“I believe that come 2019 power will change hands. The APC came preaching change but we have not seen any change.

“ I want to assure Nigerians that the real change will happen in 2019 by the grace of God.”

On concerns that the PDP was defeated in 2015 on account of impunity and corruption and may not gain the confidence of the people in 2019, the lawmaker said the party had learnt from its mistakes.

According to him, failure is not a finished product but a raw material.

“ We have learnt from our mistakes and we are ready to make amends where we failed.

“We are ready to sit at a roundtable to discuss issues to ensure that there is no imposition of candidates because we have learnt a lot from our past.

“Talking of impunity and corruption, this government is not immune from it; unfortunately they shy away from constructive criticisms.

“God predestines people to power and he whom God pre-destines he calls,” he said.

Gyunka assured Nigerians that the alliance would work towards a Nigeria where the standard of living would be improved.

But, Gyunka’s colleague, Sen. Abu Ibrahim (APC-Katsina) described the coalition as “laughable” and said that APC would not be bothered about it.

He said that no APC member would lose sleep over the coalition, adding that they were not recognised by Nigerians and would not win the election.

The lawmaker said: “if you take individuals, not more than two or three matter and may have an impact in their states.

“Some of them matter in their states but they are not more than four out of this jamboree.

“For Buba Galadima, has he ever won an election? He was the longest parasite that hung to Buhari because he couldn’t deliver anything.

“I have been with them for the past 15 years, so I know them and their antics. Can he win his ward in Yobe? They do not even know him there.

He added that the APC was not afraid of the large number of parties coming together, adding that many of them did not have members.

“Of all those parties, tell me the one that has members. It is only R-APC that we may lose one governor to and three or four senators, that is all,” he said.

Ibrahim expressed optimism that the APC would win the 2019 elections, adding that most of the parties forming coalition did not have structure.