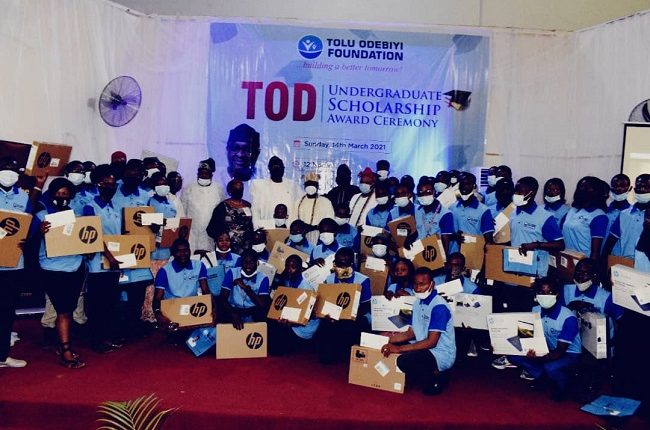 53 undergraduates have been awarded a scholarship by Senator Tolu Odebiyi, as part of efforts to assist academically gifted students to achieve their goals.

Odebiyi, representing Ogun West Senatorial District in the National Assembly, hinted that the scholarship scheme was structured in a way that it would support the beneficiaries’ education throughout the duration of their studies.

He expressed optimism that the scholarship would go a long way at eliminating monetary challenges and other forms of distractions that inhibit their quest for quality education.

The lawmaker noted that the prevalent high rate of unemployment and the increasing usage of technology in all human endeavour must be encouraged, especially during this COVID-19 pandemic.

Odebiyi urged youths to embrace technological practices to enable them to explore opportunities that abound in the emerging fourth industrial revolution era.

He noted that it had become expedient for the nation to ensure a paradigm shift from the present educational structure, which he described as being outdated.

The lawmaker insisted that digital skills and training would enable youths to be self-reliant while taking their minds off non existing white-collar jobs.

The beneficiaries of the scholarship award were also given a laptop each and a cash sum of money.

He posited that education plays a major role in shaping the future of the youth, thereby making them become better citizens who would be useful to themselves and society.

The Senator stressed that it was important for the youth, especially the beneficiaries to go into the future with a new hope, a new vision, a new mind, a new approach and a new idea to enable them to contribute their quota to the socio-economic development of the state and nation at large.

“Technology is the future, you must be opened to embrace it. You must be technologically savvy, and be ready to maximize and explore modern technologies to your advantage. The current realities across the world, including Nigeria, presuppose that many jobs might be taken over by technology in the next few years. Robotics, Artificial intelligence (AI), Machines Learning and Virtual Reality (VR) amongst others are the new world order of technology that you all must be ready to embrace.

“Let me hereby reiterate that your continued relevance in the future is hinged on how you adopt technology, innovations, disruptions and productivity. You must develop an insatiable quest for more ideas and skills; you must be versatile because enterprise skills are the work of the future. You must endeavour to learn new things, new skills and new ideas and be creative in all that you do,” he said.

He added that the major yardstick for selecting the beneficiaries was their superlative academic performance and therefore enjoined them not to rest on their oars.

Earlier in his remarks, the Chairman, Board of Trustee, Tolu Odebiyi Foundation and former Vice-Chancellor, University of Lagos, Professor Rahman Bello, submitted that the foundation is poised to give educational leverage to students of the senatorial district which was at less advantage through financial intervention, welfare packages and mentor programmes, with a view to enabling them to compete favourably with their counterpart across the globe.

Bello lauded the foresight of Odebiyi at ensuring continuous financial intervention to students.

He added that the foundation which aimed at diversifying beyond formal education would continue to accommodate all and sundry towards giving hope to youth from the Senatorial district.