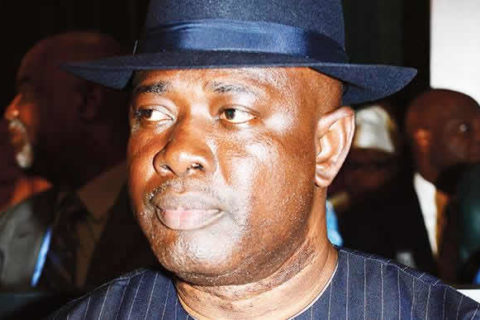 Share
Former Minister of State for Agriculture and Rural Development, Senator Heineken Lokpobiri, has rejected the outcome of the All Progressives Congress (APC) Bayelsa State governorship primary, described it as a charade.
Briefing newsmen at his campaign office in Yenagoa, Wednesday evening, Lokpobiri said the only authentic person in position to conduct and declare the result of the primary is the Governor of Yobe State, Mai-Mala Buni, who served as the returning officer of the primary.
He said “I have never seen where a governorship primary starts in a hotel and ended in a hotel. This is a charade and we are not going to accept the outcome of the primary.”
Earlier today, the Collation Officer, Senator Emmanuel Ocheja, announced that Chief Lyon polled a total of 42,138, votes to defeat five other aspirants.

He said Mrs Desiye Nsirim came a distant second with 1,533, while Chief Ebitimi Amgbare came third with 633 votes.
Senator Heineken Lokpobiri was said to have polled 571 votes to come fourth while Prof Ongoebi Etebu and Prince Preye Aganaba got 564 and 354 votes respectively.
Senator Ocheja, who was flanked by the other national and state officers of the party said he was standing in for the Returning Officer and Governor of Yobe State, Ibrahim Gaidam, who he disclosed was unavoidable absent.
He pointed out that six aspirants contested the election, adding that the mode of the primaries was ‘Direct Primaries’ ‘Option A-4, ‘ adopted by the state stakeholders and leaders of the party in the state and ratified by the National Executive Committee, NEC, of the party.