Politics
By OSARETIN OSADEBAMWEN On Sep 22, 2019 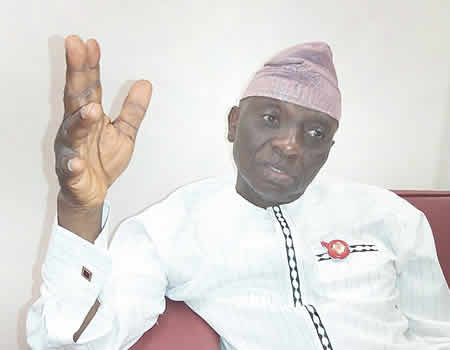 Senator Adeyemi Oriolowo represents Osun West Senatorial district in the Red Chamber. He is chairman, Senate Committee on Legislative Compliance and Vice Chairman, Senate committees on Privatisation and Solid Minerals. He speaks with OSARETIN OSADEBAMWEN on a variety of issues involving governance and management of human and natural resources.

LEGISLATIVE compliance is one huge task for the legislature in relation to the various institutions of government. How will the Ninth Assembly manage the crisis of non-compliance by ministries, departments and agencies (MDAs)?

Legislative compliance is a relatively new committee as far as the Senate is concerned. It is the same in the House of Representatives, compared to other standing committees of both chambers. While in the past, activities of the committees were restricted to National Assembly matters, one could see that the scope of this committee is far-reaching. I have discussed with the committee vice chairman that what we will do first is to take inventory of the laws, resolutions, instructions and advice that had been passed to various MDAs, examine and measure the level of compliance so far.

Having done that, we will now map out an established mechanism for compliance, such that there will be set indicators that each MDAs will see how they are performing in accordance with the laws and regulations that established them.

If they are in compliance with most of the issues we have in terms of budget performance, operational performance etc., the problem of performance in government will fizzle away. We have that plan and we are already working on it.

Where there is capacity, there is nothing that is impossible, where you are able to build your capacity to meet with the responsibility assigned to you. I assure Nigerians that I will do justice to the task by the Ninth Assembly in all three assignments.

Nigeria is talking about diversification and solid minerals offer the nation alternative source of revenue for national development. Here Ajaokuta Steel Company comes to mind. Will Nigeria witness the activation of the steel company to meet our national steel demand through your legislative intervention?

I am fortunate to have one of the pioneer engineers at the Ajaokuta project as my classmate in the polytechnic. We are still very close today. He is an asset to tap into in understanding Ajokuta steel and possibly proffering solutions.

On a general note, what I have seen in this country is that we do not seem to be serious about harnessing the services of our resources for development, because we have a lot of mechanical engineers in the country. Among them are young boys that are leaving universities and those who have become fellows and so on and so forth. Yet, we cannot operate a refinery.

Ajaokuta has a role in the industrialisation of our country. There are others critical sectors like power, the solution to industrial needs. If we can solve the problem of power, it will give us a great leap.

My thinking now is that the nation should expand the local content provisions to make sure that our engineers are compulsorily part of the development of these critical sectors of the nation’s technology and economy.

We can bring in expatriates to do the design and consultancy and get our engineers to develop their capacity and ask them to do the construction under the supervision of the expatriates. I would rather perfect to have our own engineers involved in these projects from planning, design and execution of the project. It will help us, not only in the steel industry, but also in related areas like railway. Of course, there is a link between the success of Ajaokuta and the railway.

We are doing railway now and these foreigners will do the construction and leave the operation and maintenance of the rail project to Nigerians, while our human resources are left out of the critical aspects of the project. There is a Yoruba adage which says that there is a limit you can walk in a town at night, when you do not know the same town during the day.

Therefore, it is incumbent on us to face our problems head on with our own nationals. Most of them will go out of Nigeria and perform excellently. Why can’t we engage them and utilise them in the country? They are our citizens. They are loyal to state and will be willing to leave a legacy in their fatherland. It s high time we began using our own to build our country.

We are going to review the local content legislation as regards how it is being complied with for efficiency in national development.

Nigerians have come under severe attacks in South Africa in recent times. As a senator of the Federal Republic of Nigeria, what would be your counsel to the government?

My suggestion to government is that the immediate action is to report the incident to the United Nations (UN). Before the new spate of xenophobic attacks, I was in South Africa, two weeks to the incident. You could see the restiveness among the South African nationals. If you look at the whole thing, it does not look like the government of South Africa is concerned about the incident.

I think we should really try to examine our relationship with South Africa. We should go the diplomatic way to solve the issue.

When you talked about the diplomatic way, what are the specific demands Nigeria should make from the UN in its intervention?

Of course, one would ask the UN to prompt South African government to review or revisit the incident in official manner and probably secure redress to the affected foreigners. I know that it is not only Nigerians who were affected in the violent attacks. There are other foreign nationals. So, there should be proper redress on the issue and compensation to the affected victims.

How do you think xenophobia will impact on the future of the South African economy and diplomatic relations with other African countries?

Bilateral relationship with other African countries is being jeopardised. It is nothing to be proud about. South Arica is one of the countries that are being looked up to in Africa for future of African countries. Unfortunately, the leaders are not looking at it that way. However, I want you to note that South African has about four per cent white population in parliament.

The fact that they are not antagonistic towards the white that tortured them under Apartheid is commendable. I really do commend them for that. I salute the visionary first black president of the country, the late Nelson Mandela. He did not force the white out of their system totally. Nonetheless, it is sad that they could accommodate those who tortured them and begin to attack their own brothers that helped them in the liberation struggle.

Of course, it is not the foreigners who are taking their jobs from them. The whites will not compromise capacity for ethnicity. They know that. So, even if they send all the foreigners out of South Africa, until their own nationals have developed the capacity to carry, on the whites would rely on trusted capable hands to do the jobs.

There is one thing I want to say, something I experienced when I was there. There is less awareness creation. It seems that the government of South African has not made their nationals to know and understand the role other nations played in their liberation. It is easier for South Africa to organise and educate their nationals than even Nigeria.

I saw them maintain the structure of the grouping that was there before their independence. Every Sunday, you see South Africans come together in a group, but because there is no government intervention or other positive external intervention to put them on the right way, they use the group to contribute money and waste it on alcohol.

This means the platform needed for educating them is already there. It is left for the government to step in and use the meeting to promote their consciousness on the role their brothers in other countries played for their national liberation.

Would you support a cross-cultural exchange programme between South Africans and Nigerians targeted at youths of both nationals to see their commonality as against this xenophobia madness?

I think I strongly support that particular idea of creating an institution for exchange of cultural heritage between both countries and other African countries for that matter. To that extent, you will see that the place of history for both Nigeria and South Africa is very significant. It is very important that both countries really intensify the use of history in schools to train our youths early on their common ground for living together.

Even in Nigeria, very few of our younger generation know what happened then, as short as the time of this event may have been. In those days, people like, Baba Obafemi Awolowo, Tafawa Balewa and Ahmadu Bello are read. We still read about their achievements while they were alive in the history classes of Nigeria.

There are allegations of drug trafficking against some Nigerians. Should that be the case, does it justify the widespread attacks on Nigerians?

It is the duty of South African government, particularly their security outfits, to fish out any criminals whether foreign or South Africans, and bring them to book. If they are sure that Nigerians are perpetrating these crimes, they should be arrested and prosecuted in the law courts, so that the normal judicial process will be followed.

Take it from me, one cannot totally dismiss the place of envy from the South Africans towards foreigners, because if Nigerians are coming in and they are making it within that country and the nationals are there looking and unable to make it. There will be the problem of envy between the nationals and foreigners.

I think apart from that, cultural institutions should be strengthened. There should be exchange of technology whereby South Africans are also assisted in training their citizens outside South Africa, like we chose to train Zimbabweans and the South Africans during the struggle. It is not yet over. If it is possible to have that type of exchange; they come here to learn how to do one or two things, particularly local technology, and they go back with such knowledge and we have same, it may help reduce this kind of hostility towards other nationals.