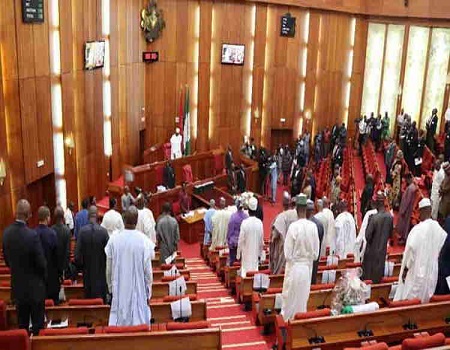 The Senate on Tuesday sought for inquiry on the alleged closure of more than 600 shops and businesses belonging to Nigerians by Ghana Union of Traders Association (GUTA) on Dec. 2.

The resolution of the Senate to wade into the matter followed a motion sponsored by Sen. Ifeanyi Ubah (YPP Anambra) on “The need to investigate alleged ill-treatment and injustices suffered by Nigerian Traders and Business owners in Ghana”.

Presenting the motion at plenary, Ubah decried the alleged injustice and ill-treatment of Nigerian traders and Nigerian business owners in Ghana.

He said it was a concern because Ghana and Nigeria as members of ECOWAS have reciprocal obligations under the ECOWAS Protocol to their respective citizens to reside and do business within their territories without molestation.

Ubah said as at the end of 2010, Nigerian businesses accounted for 60 per cent of foreign investments in Ghana from the African continent.

He said once-flourishing economic relations between Nigeria and Ghana had come under repeated threats as a result of the recent hostile posture of Ghanaian authorities and indigenous Ghanaian’s Traders Union towards Nigerian traders.

He said the Ghanaians had adopted discriminatory legislation aimed at frustrating Nigerian traders such as the passage of the Ghana Investment Promotion Commission Act 865 (GIPC).

He said the act raised the amount of money in registering businesses owned by foreigners (mostly owned by Nigerians) in Ghana to 200, 000 dollars.

He said the act further prohibits foreigners from trading in particular markets.

He said the GIPC Act 865 of 2013 also prohibits ECOWAS citizens from engaging in Small and Medium Scale Enterprises ( SMEs) with a further prohibition on the registration of SMEs by foreigners.

According to him, one of the obstacles was the requirement of proof of importation of I million dollars into Ghana.

This, he said was previously applicable to citizens of non-ECOWAS member states such as China and India, among others.

He said Nigeria and Ghana had previously set up a Joint Task Force from the Trade Ministries of both countries to inspect business facilities of companies registered under the ECOWAS Trade Liberalisation Scheme (ETLS)in both countries.

He said both nations had also organised an economic submit in Accra in 2010 to address the dangers of threats to the business interests of Nigerians in Ghana.

He, however, said the measures and the protection offered Nigerian traders in the ECOWAS framework had failed to address the incessant threats to Nigerian businesses in Ghana.

He said that unless the senate intervenes, the situation may deteriorate into a serious diplomatic and economic crisis.

He said the complaints of affected Nigerian traders and business owners had yet to receive the deserved attention by appropriate authorities from the Federal Government of Nigeria in spite of repeated written complaints.

Ubah said there was an urgent need to investigate the allegations and indeed draw the attention of the Federal Government of Nigeria and its relevant authorities to the unfortunate development.

He said there was a need to put in place measures that would protect the Nigerian business in Ghana.

However, Sen. Isa Jubril (APC Kogi), said every country had a policy on how to protect its indigenous enterprise.

Isa said the action of the Ghanaian authority was designed to protect the interest of its citizens, insisting there was a need to investigate the matter.

But Sen. Abubakar Yusuf (APC Taraba), however, said that he differed from the proposed process of archiving the intended result.

He said some of the contents of the motion were highly speculative, noting that the issue was really an executive matter and the Senate should be careful on its handling of the matter.

However, Sen. Enyinnaya Abaribe, (PDP Abia) said the motion seeks to draw the attention to what was happening to Nigerians in Ghana and seek to ensure that Nigerian Citizens were not unduly punished.

Sen. Sandy Onor (PDP Cross River), said that there was the need to investigate and see why Ghanaian authority was embarking on such policy.

The Senate, in its resolution, delegated its Committee on Foreign Affairs, Trade and Investment to liaise with the Ministry of Foreign Affairs, to investigate the status of Nigerian businesses in Ghana.

In his remark, President of Senate Ahmad Lawan said that it was the responsibility of government to seek for the protection of its citizens where ever they reside.

He said the time had come for Nigeria to engage Ghanaian authority to find out what the actual situation was and proffer solution.