Says law must take its course 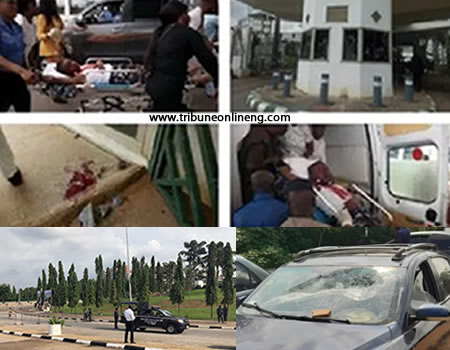 The Senate on Wednesday condemned the invasion of the National Assembly Complex by members of the El-Zakzakky’s Islamic Movement of Nigeria (IMN).

Members of the sect have been staging protest in the Federal Capital Territory over the continued detention of its leader, Ibrahim El-Zakzakky and his wife who have been in the Department of State Security Services, (DSS) protective custody in the last four years.

The mob on Tuesday forcefully gained entrance to the National Assembly through its main entrance known as MOPOL Gate, having attacked some policemen on duty. One of the policemen who was injured has since given up the ghost.

Speaking with newsmen after Wednesday’s plenary, Chairman Senate Ad-Hoc Committee on Media and Public Affairs, Senator Adedayo Adeyeye, described the incidence as barbaric and a desecration of the sacred institution of the National Assembly.

He said: “They forcefully seized one of the security operatives’ gun, shot two security personnel, unleashed terror on others, vandalised the gate, and burnt three vehicles of innocent individuals.”

Senator Adeyeye demanded a thorough investigation from the Inspector General of Police, Mohammed Adamu saying adequate punishment of the apprehended culprits would go a long way to serve as deterrence.

Adeyeye described the incidence as scary and pleaded that the lawmakers should not be distracted but accorded its due respect to concentrate on her mandate of legislation for good governance, security and peaceful co-existence of Nigerians.

“The Senate hereby urged all law enforcement agencies to rise up to their biding and urgently fish out the perpetrators of this dastardly act with the law taking its full course.

“While the National Assembly is a public place for Nigerians, citizens must follow proper channels and protocols if they have cause (s) to access its premises.

“Senate hereby calls for security beef up within the National Assembly and other institutions henceforth.”