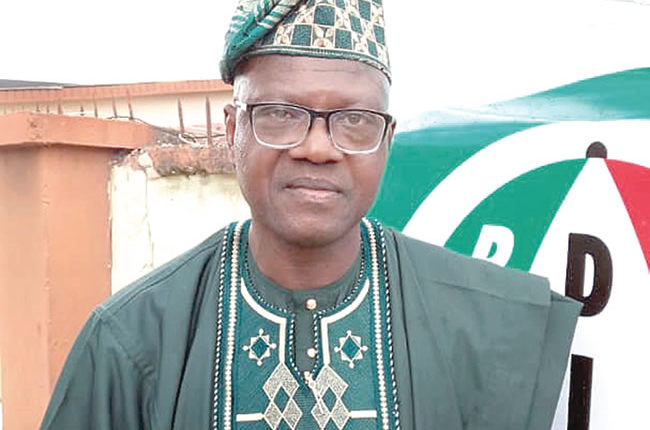 Factional chairman of the People’s Democratic Party in Ekiti state loyal to Senator Biodun Olujimi, Honourable Kehinde Odebumi tells ‘YOMI AYELESO in this interview the cause of the crisis and how the National Working Committee can save the party from collapse in the state.

What do you think is responsible for the crisis in Ekiti PDP and even in the zone ?

The primary cause is former governor Ayo Fayose refusing to allow internal democracy within the party during the ward congresses which is the foundation for the local government and the state congress. The National Working Committee is working in collaboration  with Fayose to get control of the party in Ekiti, thereby causing these problems. The ward congress has always being held every four years where the memebers and leaders in that ward will choose their exectuives as well the delegates. It is done at the ward level but the NWC decided to send people to conduct it and give the election materials to governor Fayose and allowing him to be writing the lists at a hideout different from the collation centre. Even the chairman of the election committee made himself unavailable to the party members and leaders , especially the  state working committee, which should be under them. You can’t conduct the election in 177 wards from Abuja , it is not possible. Even the team from Abuja came to Ekiti in the afternoon of election, which is wrong. If they had not planned to rig the congress for Fayose, they ought to have been in the state a day before and received by the SWC, but that was not the case. I was in my Aramoko ward 2 where all party members were seated and the congress as usual was conducted in the presence of INEC and security agencies and when we complained to the party headquarters, they said it won’t happen only for us to see they have received the list from Fayose.

Are you saying the NWC has not done enough to end the crisis ?

They have not done anything. All we see is that they always tell Fayose the next step that will happen because it is Fayose that always posts the decisions of the party, we were kept in the dark. When governor Seyi Makinde came into the matter, the NWC constituted a caretaker committee headed by Senator Hosea Agboola, when the tenure of the former SWC expired. Why can’t they allow the former executives to transcend into the caretaker like the it was done in other states. But because Fayose did not want it, they did that, I think you can see the partiality on the part of the NWC. It was  predetermined  by them to foist Fayose’s choice on us and it cannot work. Fayose always dictate when he was governor but we can see that attitude almost killed the party in Ekiti. When we thought the party is having a new life and relief, the NWC is still supporting him to damage the party.

In specific terms, what is the role of Governor Makinde in all of these?

Governor Seyi Makinde as the only serving governor of the party in the south west automatically becomes the leader in the zone and when this issue started, the matter was referred to him by the NWC. So how can you say he will not intervene?  He has not imposed anything but appealing to us to allow harmonization even before we started the congresses. But we said let us know the strength of the groups first and I believe that is why Fayose was manipulating everything. He should be ready to face free and fair contest having ruled Ekiti for eight years. What is Fayose afraid of ? if not for fear of defeat, why did he not allow free and fair ward congress, why did he hijacked the election materials ?  For instance, he came and pick chairman in my own local government, is that democracy ?  That is impunity and that is what we are against.

As it stands, what do you think is the way out ?

Unless we get these issues right, we are planning to fail in 2022 election in the state. But we still have at least one whole year for the NWC to do the right thing. Don’t forget the judge at the Federal High Court said the party should go and resolve it and let me tell you the party has not call us for any meeting. The party suppose to be a referee in this issue, but what they are doing is like they want to destroy the party in the state. We are committed party men and we don’t believe in manipulation of results, that is why we went to court because we have lost confidence in the NWC , they cannot be a true arbiter. It is only the court that can give us  justice. If the party truly believes in its motor of unity, justice and progress, where there is injustice, there can’t be unity and where there is no unity , there cannot be progress. It is food for thought for Uche Secondus and his NWC, they should do the right thing, unless he has sacrificed Ekiti for his personal interest.

NWC has done the right thing in Ekiti PDP —Kolawole