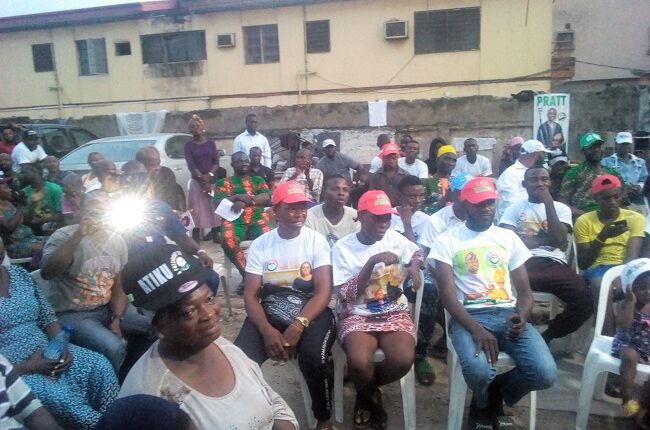 Scores of members of the Lagos State chapter of the All Progressives Congress (APC) have reportedly defected to the main opposition Peoples Democratic Party (PDP), citing a lack of internal democracy in the ruling party as part of the reasons for their defection.

The members, from Ward J, Iwaya Area of Lagos Mainland Local Government Area (LGA), were on Tuesday evening received into the party at the PDP LGA Secretariat in Alagomeji area of the state by Dr Adetokunbo Pearse, a PDP stalwart and member of the Atiku/Okowa Presidential Campaign Council(PCC).

Leader of the defectors, Mr Nurudeen Daud, a former aide to a member, Lagos State House of Assembly, Hon. Olanrewaju Oshun, representing Lagos Mainland II, said that more APC loyalists would join them in PDP in batches, declaring that enough of what he termed slavery which the ruling party had subjected people of the state for the past 23 years.

Daud, who expressed appreciation to PDP leaders in the council area for the warm reception, said that so many ambitions and aspirations had been allegedly buried in APC due to a lack of internal democracy and jettisoning of competence for loyalty, adding that they had come to contribute their own quota to the growth of PDP, which he described as a truly democratic party.

“We are happy to be a part of history because we are making history today. It is time to take back our destiny. It is now left in our hands.

“Our coming to PDP is holistic, we have come to contribute our part to the growth of PDP, which is a truly democratic party,” he said.

Speaking further, Daud listed the new members including Mr Yusuf Alade, a grassroots mobiliser and councillorship aspirant, Daniel Obony, Olumide Aluko, Tunde Aliu, among others, saying that PDP has the opportunity to win the state in the 2023 elections.

“For over 20 years, Lagos has been under slavery, and we are taking it over from them. We are saying it, they can’t change, we have not started the campaign, and when we start, we would talk.

Receiving the defectors, Dr Pearse, assured them of fair treatment and a level playing field to pursue any of their aspirations.

Pearse prayed to God to help the defectors to achieve their aspirations and further assured them that the party was the most democratic, effective and productive in the country.

This was just as he asserted that the party was formidable enough to win the 2023 elections, saying that the main opposition platform had very sellable presidential, governorship, senatorial, house of representatives and the house of assembly candidates, but quickly cautioned against infighting and division in the party.

“You are welcome. With your entry, we are surer that PDP will take over Lagos State.

“We have very sellable presidential, governorship, senatorial, house of representatives and house of assembly candidates.

“We must learn to do politics properly. We fight ourselves in PDP all the time and that is why we lose elections. This time around, we are united.

“If we do our job very well in Lagos, we will beat APC. We have been the cause of our recurrent defeats, but this time, we are one,” the PDP chieftain said.

The PDP Chairman in the council, Hon. Malomo Adelabi, in his own remark, assured them that their new party would give them all the opportunity to attain their aspirations.

Also speaking, the PDP Chairman in the council, Mr Malomo said: “PDP will give to you all that opportunity to attain your aspirations, adding: “So, don’t be afraid, by the grace of God, your ambition will be achieved here.”

The event also witnessed the defectors burning the brooms, their former party symbol, followed by a presentation with cards, umbrellas and party flags as registered members of the PDP.