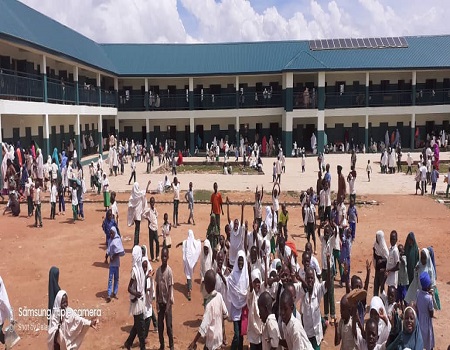 Public schools in Kaduna State witnessed a mass turnout of students and pupils as academic activities begin for the 2019/ 2020 session.

News Agency of Nigeria (NAN) correspondent who monitored some of the public secondary and primary schools in Kaduna reports that most of the schools had about 80 per cent of pupils’ resumption.

Teachers were also seen in their classrooms teaching, while registration of new pupils in primary schools was ongoing in all the school visited.

The Head Teacher of Sheik Gumi Primary School, Tudun Wada, Mrs Larai Salisu, told NAN that all teachers have resumed and pupils’ attendance was about 80 per cent.

Salisu added that so far, about 500 new pupils have been enrolled in the school, adding that the enrollment continues.

The Head Teacher, Aminatu Ali, told NAN that about 700 new pupils had so far been enrolled, adding that parents were still bringing their children for enrollment.

Aminu who also went round to monitor the resumption and enrollment of new pupils, in line with the World Bank-supported Better Education Service Delivery for All, said he was impressed.

He said that the turnout of teachers, pupils and particularly parents who came out en mass to enrol their children was highly encouraging.

The director expressed optimism that the state would meet the 145,000 enrollment target set for the 2019/2020 academic session.

NFC to fund films that promote peace in Nigeria