Arts and Culture
By Akintayo Abodunrin On Aug 25, 2019 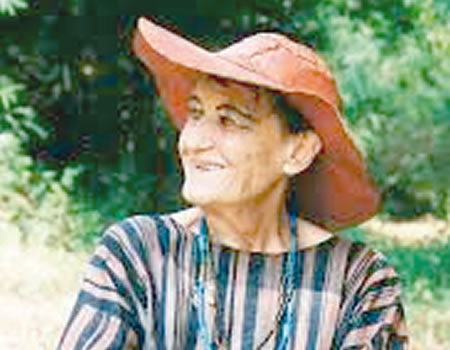 THE adopted children and associates of the late Adunni Olorisa (Susanne Wenger) have been commended for continuing to sustain her legacies ten years after she passed.

The Austrian- born Osun high priestess died on January 12, 2009, aged 93 after spending well over 50 years in Nigeria. She did groundbreaking work in the Osun Grove and served as custodian/promoter of traditional Yoruba arts and religion.

In a memorial lecture entitled ‘A Decade After the Glow’ to mark the 10th anniversary of Adunni’s demise, Professor Oyeronke Olademo of the Department of Religions, University of Ilorin, lauded the groups and individuals for their efforts in sustaining Adunni’s spiritual and artistic legacies.

The lecture held as part of activities of the 2019 Annual Ulli Beier Lecture and Workshop/Annual Susanne Wenger Memorial Lecture organised by the Centre for Black Culture and International Understanding, Abere, Osun State on August 14 and 15.

The lecturer, who began by highlighting the forms, functions and interrelationship between art and religion among the Yoruba, said the fusion of the two was at the core of Wenger’s art. “The singular purpose of her work is to protect the sacredness of nature. Her works present to us a mixture of architecture and sculpture. The shrines of the gods are for them a stately home while the sculptures embody their myths. Embedded in these myths are characteristics and taboos of each god. Susanne Wenger sought to reflect these features as much as possible in her sculptures of and for the gods.”

Olademo, who recalled Wenger’s background before her arrival in Nigeria, recalled how Ajagemo, a high priest of Obatala, introduced her to Orisa religion in Ede and how she began working for the gods in the city. The lecturer singled out sculptures produced by Adunni and her assistants including Ontotoo, Obatala and Iya Moopo in the Osun Grove for their significance.

She added that “documentation, preservation and the proclamation of Yoruba religion are strongly embedded in her sculptures of/for the gods/goddesses, and this necessarily expounds the honour and reverence due to these deities. The result of this is a daily “aliveness” of the religion among its adherents who are Yoruba, other Nigerians, and Non-Nigerians. It has been possible due to this “aliveness” of Yoruba religion to hand over the faith to coming generations despite their exposure to western education and civilisation. Hence today, among practitioners of Yoruba religion, we find lawyers, doctors, academicians, architects and engineers to mention but a few. The resilience of Yoruba religion is being manifested more and more by the day as confirmed by the presence of non-Nigerians practitioners.”

The former Dean, Faculty of Arts, Unilorin also noted that Wenger’s legacies are spiritual and artistic, and commended individuals and groups within and outside Nigeria that have been sustaining them.   She hailed Adunni’s adopted children, friends and fellow artists for maintaining her spiritual legacies. Olademo also praised the National Commission for Museums and Monuments, Osogbo Cultural Heritage Council, Osun Grove Support Group and the Adunni Olorisa Trust for preserving her artistic legacies.

Wenger’s legacies, Olademo, concluded, “have implications for individuals, and government, especially concerning the need to appreciate Yoruba culture and religion, and utilise the values embedded in same for national development.”

In Akure, accolades for Fagunwa, Soyinka

How the plot to eliminate Awo in Calabar prison was foiled —Gabriel Ohwo, ex-Calabar Prisons head