Save Akin from impending death, father of 23-year-old sickle cell patient, cries out 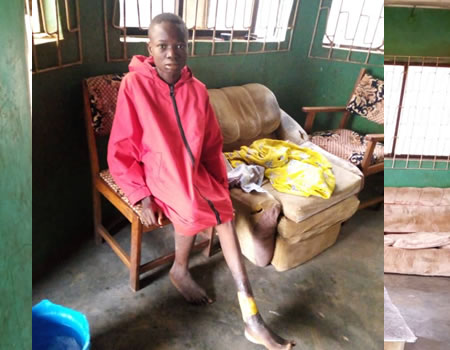 Share
When Akinkunmi Ogundele lost his mother, in July 2018, he eventually,  lost hope because his mother, Mrs Kafy Ogundele was everything he could think of.
Akin, as he is fondly called, is a sickle cell patient and he has had a fair share of the crisis that usually confronts a  sickle cell patient like him.
But the crisis leading to his present predicaments began in November 2017,and up till the present moment, he has always been in pain.
“We noticed something like a wound on his left leg, but since we did not know anything about what is called sickle cell leg ulcer, we believed it was a minor injury”
“Though, Akin, being my first son, was a sickle cell patient, he had always been frequenting the hospital for his treatments. But before we could detect what the problem was, it had become unbearable for the young man”
“As the father, I lost my job about three years ago, and since then it has been very difficult taking care of Akin and his two younger siblings”
“At a point in time, some good Samaritan and kind-hearted Nigerians and individuals have  helped us,that was how we were able to take him to Ladoke Akintola University Teaching Hospital (LAUTECH) for treatment”
“Akin’s case is becoming critical at the moment, because we need at least, two million naira(2million) for the operation” 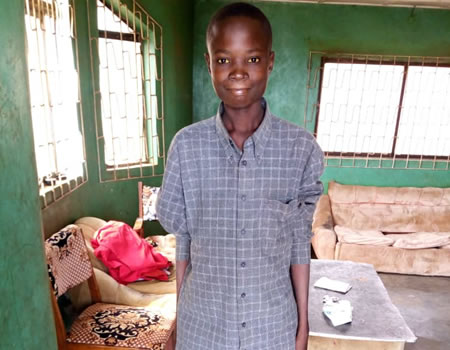 The surgeon in charge of his treatment, Doctor Ilori O.S. at the Surgery Department- Ladoke Akintola University Teaching Hospital(LAUTECH) Ogbomosho, Oyo state, told us that my son can get back on his feet if we could raise the money for what he described as skin- grafting.
He said as a sickle cell patient, there is an urgent need to do the operation before it is too late.
“I am using this opportunity to beg all Nigerians to help me raise the money for his treatment. My young boy has been in pains all days and he emaciates daily”
Mr Ogundele lamented that it was this terrible situation that deprived Akin his university admission on two occasions.
“Every week, we spent ten thousand naira for the treatment. Some of my friends have been responsible for this, but sadly, we could hardly raise the money at the moment”.

Appealing to Nigerians, Akinkunmi expressed sadness that since he had completed his secondary school three years ago, he had, on two occasions gained admission into the University of Ibadan, (UI) and Obafemi Awolowo University, Ile Ife, but he was unable to further his education because of his present health challenges.
“I want to live my life like every young adult, but life has been so difficult for me because rather than progressing in my education, I have found my self begging for help and this is not the kind of life I bargain for. So I am begging and appealing to kind-hearted Nigerians to help me raise the money, so that I can be able to do the surgery and get back on my feet. “he appealed.
Kind-hearted Nigerians that are interested in keeping this boy’s hope alive, and also helping him to get back on his feet can easily help through: Ogundele, L.Oyeniran. ACT/NO-0109218776. BANK-GT.
” I am begging Nigerians to save my life from this ailment. Whatever you can give to save my life will definitely help in alleviating my chronic pains and sufferings. I want to live, and I look up to God for the grace to scale through life’s hurdles” the young lamented.
Meanwhile, Mr Ogundele could be reached on:08054181785.