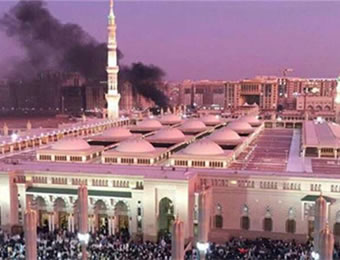 The Muslim world has united to condemn a deadly attack at one of Islam’s holiest sites – the Prophet’s Mosque in the Saudi city of Medina.

Setting aside differences, world leaders, politicians, groups and activists expressed their outrage on Tuesday, a day after a suicide bomber killed at least four guards within striking distance of the Prophet Muhammad’s tomb.

The blast followed two more attacks, in Jeddah and Qatif, also on Monday.

A spokesman for Saudi Arabia’s interior ministry described the triple bombings as “despicable acts that did not respect the sanctity of place, time and innocent people”.

Here are some of the reactions from around the world following the suicide attacks.

“We stand shoulder-to-shoulder with our Saudi brothers in fighting the menace of terrorism,” General Raheel said.

Cairo-based Al-Azhar, the highest authority in Sunni Islam, condemned the attacks and stressed “the sanctity of the houses of God, especially the Prophet’s Mosque”.

Saudi Arabia’s supreme council of clerics said the blasts “prove that those renegades … have violated everything that is sacred.”

Lebanon-based Shia group Hezbollah also denounced the Medina attack as “a new sign of the terrorists’ contempt for all that Muslims consider sacred”.

The governments of Jordan and Lebanon joined in the condemnation, while Iraq said the attacks amounted to “heinous crimes”.

Indian singer Adnan Sami expressed his sadness over the attack in one of the Muslim world’s most important sites.