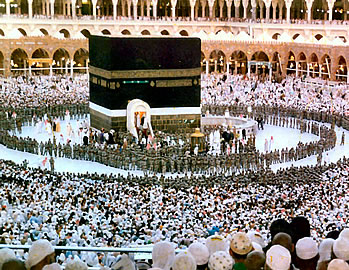 Saudi Arabia has banned more than 400,000 illegal pilgrims from entering Mecca for not having Hajj permits, Saudi Press Agency reported on Tuesday.

This was highlighted by the interior ministry during a news conference on Hajj security plans that were designed to accommodate more than two million pilgrims expected to perform Hajj 2017.

Saudi Arabia has taken serious steps, including fine and jail terms against violators to ensure smooth Hajj operation for the pilgrims.

The ministry also announced that until on Tuesday 1.7 million foreign pilgrims and around 200,000 domestic pilgrims had arrived in Mecca.

More than 100,000 members of the Saudi security forces will participate in this year Hajj 2017 this week.

Saudi Interior Ministry spokesman, Mansour Turki, said that the security services had dismantled a number of militant cells in Mecca and Medina over the past few years.

Maj.-Gen. Mansour Al-Turki, a security spokesman from the Saudi Arabian Ministry of Interior, said that strict measures were in place at the entrances to Mecca, Medina and other holy sites as well as airports and seaports.

“So, we do not overlook the reality of such potential threats and we take all necessary preventative measures.’’

Turki said the security forces had taken all necessary measures to prevent a stampede like the one that killed hundreds of pilgrims in 2015, without providing details.

But he also urged pilgrims to abide by their assigned schedule for performing the sacred rituals.

“Each group must abide by the specified paths assigned to each while throwing the jamarat,” he said, referring to one of the critical stages of Hajj, when pilgrims conduct the ritual stoning.