Saraki will be impeached — Oshiomhole 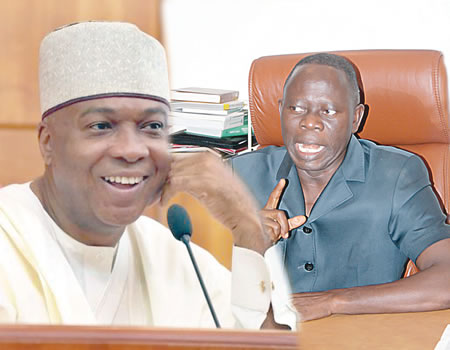 The National Chairman of the All Progressives Congress (APC), Adams Oshiomhole, has said that the Senate President, Dr Bukola Saraki, would “definitely” be impeached.

Speaking at a press conference on Friday, in Abuja, Oshiomhole said Saraki would not only be removed but the party would work hard to ensure that he is defeated in his senatorial district in 2019.

“He (Saraki) failed to understand that the Nigeria national project is more complicated and is not that easy. He will not only be impeached, we will work hard to have him defeated as a senator in his own senatorial zone come 2019,” Oshiomhole said.

“According to the law and according to the democratic norms, the only way Senator Saraki can avoid impeachment is for him to do what is honourable, which again leads to the issue of character,” the APC chairman, Oshiomhole said.

The ruling party has been mounting pressure on Saraki to step down as the Senate President after he defected to the Peoples Democratic Party (PDP) but the nation’s number three citizen has vowed to remain in office.

At a press conference on Wednesday, Saraki said he would only relinquish his position if two-thirds of the Senate removes him.

CJTF could be worse than Boko Haram – UNDP

Why people think I am wealthy —Ebenezer Obey

Evangelist Ebenezer Obey-Fabiyi remains the toast of many music lovers across the world. In this interview by SEYI SOKOYA, the music legend speaks on the secret of his success and sets the record straight about the fortune of a socialite he once famously sang about, Sade…READ MORE