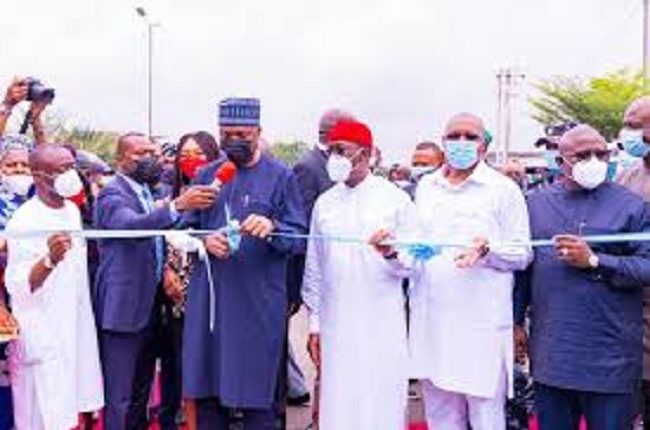 Former Senate President, Dr Abubakar Bukola Saraki, has commended governor Ifeanyi Okowa of Delta State and indeed the governors of the Peoples Democratic Party (PDP) controlled states for their developmental strides and show of commitment to the yearnings of their citizenry.

The former Kwara State governor gave the commendation while inaugurating DLA Road and its adjoining streets of Biosah Anantu, Ikuku Adindu and Vitalis Okakwu as well as the Government Primary School, Junior Staff Quarters, all in Asaba.

The construction and inauguration of the road project would bring to an end the horrific nightmare that residents and motorists go through for years even as the perennial flooding in the area has been channelled away.

According to Saraki, Asaba which started as an administrative headquarters of Delta State had also transformed into a commercial centre all due to the progress made by the government of PDP in the state.

“Your administration’s commitment to the growth and development of Asaba capital city is laudable and commendable. It gives me great pleasure to be here and to be part of this inauguration.

“For four years in the Senate we sat next to each other and I worked very closely with you when we passed the National Health Bill; I am very pleased with your performance here in Delta,” Saraki eulogised.

He noted that the new projects were already impacting the economic activities in Asaba and thanked Governor Ifeanyi Okowa for completing the projects.

In his remarks, Okowa said that “By the time we finish in the next two years, we will be glad that there was a government in the state. We are truly very happy that this road is being inaugurated by you( Saraki); there have been previous attempts at constructing the road but it failed because of inadequate drainage facilities.

“Beyond the construction of the roads, we have done the major sewer leading to the Amilimocha River and we are glad that the road will be put to use at all times in the year.”

The Director-General, Asaba Capital Territory Development Agency, Mrs Joan Mrakpor, said that the contract for the DLA Road at a cost of N1.692 billion was awarded in December 2018 to take the pressure off the Nnebisi Road.

She thanked the governor for “finally putting an end to the suffering of road users due to the deplorable situation of the road.”

Chief Nwanze Oduah, who represented the Asagba of Asaba, Obi Prof Chike Edozien, said that the road was a nightmare to inhabitants of the area, and commended the governor for being able to complete the road.

“We have witnessed an avalanche of roads inauguration in the state and as you can see, economic activities have picked up again on this road and we, the Asaba people, cannot thank you enough for doing this for us,” he said.

In spite of the huge investment in the water sector by the government and international organisations, water scarcity has grown to become a perennial nightmare for residents of Abeokuta, the Ogun State capital. This report x-rays the lives and experiences of residents in getting clean, potable and affordable water amidst the surge of COVID-19 cases in the state. Saraki inaugurates road projects. Saraki inaugurates road projects