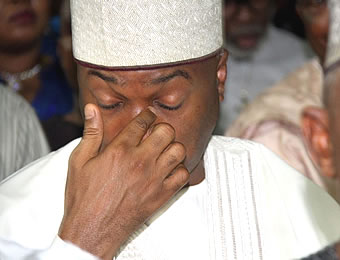 Senate President Bukola Saraki and governors from the South West Zone on Thursday converged on Ibadan to pay their last respects to the late Gen Adeyinka Adebayo.

The News Agency of Nigeria (NAN) reports that the corpse of Adebayo, a former Military Governor of the Old Western Region, was received at the Government House Arcade at 2.20 pm on Thursday

The corpse was received by Maj.-Gen. Martins Abraham, the General Officer Commanding (GOC), 2 Division, Nigeria Army, and governors from the South West Zone led by the host governor, Abiola Ajimobi.

NAN reports that the corpse was later moved to the House of Chiefs, Parliament Building, for the lying-in-state ceremony.

Paying tributes to the late Adebayo, the senate president described the deceased as one of those who worked to ensure the sustainability of the nation’s unity.

Saraki, who also commended governors in the South West Zone for giving a befitting burial to Adebayo, condoled with the family of the deceased.

He urged the younger generations in leadership positions to sustain the legacy of peace and unity which Adebayo promoted.

Ajimobi, who spoke on behalf of the governors in the zone, described the late general as a fine gentleman and a shining example to younger generations.

He pointed out that although Adebayo’s career spanned about three decades, he was never linked to corrupt practices.

The governor described Adebayo’s exit as a monumental loss to the Yoruba nation and the country as a whole.

Earlier in his address of welcome, Alhaji Olalekan Alli, the Secretary to the Oyo State Government, said the event was at once a painful loss and celebration of a fallen patriarch.

Alli said that the occasion availed all the opportunity to celebrate a former governor, worthy leader, elder statesman and respectable personality.

Among the governors present at the occasion were Rotimi Akeredolu (Ondo), Rauf Aregbesola (Osun) and Akinwunmi Ambode (Lagos), while Ekiti and Ogun were represented by their deputy governors.

Also in attendance were Adebayo’s widow, Modupe, the son of the deceased and former governor of Ekiti, Adeniyi , as well as former APC interim National Chairman, Chief Bisi Akande.

Adebayo, born in 1928 at Iyin Ekiti in Ekiti State, attended All Saints School, Iyin-Ekiti, for his primary education as well as Eko Boys High School and Christ’s School, Ado-Ekiti.

He was the first National General Staff Officer, Grade 2, Nigerian Army Headquarters, from 1961 to 1962 and the first indigenous Chief of Staff of the Nigerian Army from February, 1964 to November, 1965.

Adebayo served as the Chairman, Organisation of African Unity (OAU) Defence Planning Committee from 1963 to 1965 and military governor, Western Nigeria,  from 1966 to 1971.

He was the Commandant, Nigerian Defence Academy, from 1971 to 1972 and  finally retired from the Nigerian Army with the rank of Major-General in July,  1975.

The late Adebayo participated actively in the resolution of the Biafran crisis and was later appointed Chairman, Committee on Reconciliation and Integration of the Igbo back into Nigeria by Gen. Yakubu Gowon, the then military Head of State.