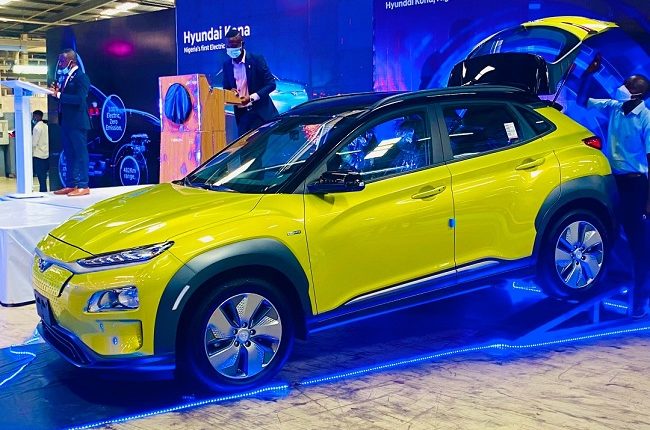 Share
Lagos State governor, Mr Babajide Sanwo-Olu, on Friday unveiled Nigeria’s first locally assembled full electric cars in a landmark event, enthusing that the assembly plant would provide more job opportunities for youths in the state when fully operational.
The electric cars, which is 100 per cent electric comes with zero-emission, a 482km driving range, and could be charged both at home and workplace, and when fully charged for 9hrs, 35mins could go a distance of 482km (the equivalent of Lagos to Warri), before it would require being charged again.
The governor, while speaking at the unveiling at the Stallion Assembly Plant, Volkswagen, Lagos, said the assembly plant would provide more job opportunities for youths in the state, adding that the state government would partner with the manufacturers by creating charging points across the state where owners could charge their cars.
According to the governor, the future the state government is seen is that of technology, saying it was incumbent on the government to create enabling environment so that job opportunity would be available for youths.
“We are creating job opportunities for teeming youths of this nation. The future we see is the future of technology and this is what we are seeing here. We as a government needs to create an enabling environment for them so they can create jobs for youths.
“We are going to create charging points across the state so people will not give the excuse they don’t have light to charge. We will provide a public charging point at Alausa and some filling station.
“For us, we see renewed hope. We are de-emphasising reliance on oil. It’s a way to go and it’s the future we are seeing here,” the governor said.
Governor Sanwo-Olu, however, promised rapid conclusion of the construction of Mile 2, Okokomaiko road for easy access.

Democratic candidate, Joe Biden has been elected President of the United States of America.Sanwo-Olu unveils Nigeria

Kamala Harris made history on Saturday with her election as Joe Biden’s vice president, becoming the first woman, first Black American and first Asian American to win the second-highest US office.Sanwo-Olu unveils Nigeria