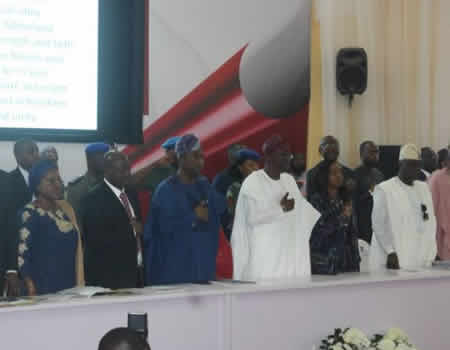 Share
Lagos State governor, Mr Babajide Sanwo-Olu, on Tuesday swore-in members of his cabinet made up of 35 members, saying the ultimate goal of his administration was to ensure that the state remained one of the top destinations on the African continent to live, work and invest in.
Besides, Governor Sanwo-Olu emphasized, “this is not just our goal, it is what the people expect from us and we cannot afford to disappoint them.”
This was just as the governor immediately assigned portfolios to the newly sworn-in cabinet members at the carnival-like ceremony which took place amidst tight security at the Adeyemi Bero Auditorium, Alausa, Ikeja, and attended by dignitaries from across the state.
Party leadership, members of the Lagos Assembly, Governor Advisory Council (GAC) members including traditional rulers from across the state, top civil servants, relations and well-wishers of the new appointees in attendance.
Twenty-two of them took oath as commissioners while the remaining 13 are special advisers.
The immediate past Secretary to State Government (SSG), Mr Tunji Bello, takes over as commissioner for Water Resources and Environment, while former Editor of The Nation newspaper, Mr Gbenga Omotoso, was assigned as Commissioner in the Ministry of Information and Strategy, with the spokesperson, Lagos State chapter of All Progressives Congress (APC), Mr Joe Igbokwe, being appointed Special Adviser (SA) on Drainage Services and Water Resources.
Other members and their portfolio are: Mr Rabiu Olowo Onaolapo takes over as Commissioner for Finance; Mrs Folashade  Adefisayo, Commissioner for Education;  Prof Akin Abayomi, Commissioner for Health; Dr. Idris Salako, Commissioner for Fiscal Planning and Urban Development; Mrs. Bolaji Dada, Commissioner for Women Affairs and Poverty Alleviation; Mr. Lere Odusote, Commissioner for Energy and Natural Resources; Dr. Frederic Oladeinde, Commissioner for Transportation and Mr. Gbolahan Lawal, Commissioner for Agriculture; Moruf Abdul-Fatai, Commissioner for Housing.
The governor named Mr Moyo Onigbanjo (SAN), as new Attorney General and Commissioner for Justice; Mr Hakeem Fahm, Commissioner for Science and Technology; Mrs Ajibola Ponnle, Commissioner for Establishment, Training and Pension; Engr. Aramide Adeyoye, Commissioner for Works and Infrastructure; Mr Segun Dawodu, Commissioner for Youth and Social Development; Mrs Uzamat Akinbile-Yusuf, Commissioner for Home Affairs and Mrs Yetunde Arobieke, Commissioner for Local Government and Community Affairs.
Still on the list are: Mrs Lola Akande, Commissioner for Commerce and Industry; Mrs Olufunke Adebolu, Commissioner for Tourism Arts and Culture and Mr Sam Egube, Commissioner for Economic Planning and Budget.
The SAs and their portfolio are: Dr. Wale Ahmed, Special Duties and Inter-Governmental Relations; Ms Ruth Bisola Olusanya, Special Adviser, Ministry of Agriculture; Princess Aderemi Adebowale, Special Adviser in the Office of Civic Engagement; Mr. Afolabi Ayantayo, Special Adviser on Political and Legislative Affairs and Mrs. Toke Benson-Awoyinka, Special Adviser, Ministry of Housing.
Others are: Tubosun Alake, Special Adviser for Innovation and Technology; Architect Ahmed Kabiru, Special Adviser, Urban Development; Anofi Olanrewaju, Special Adviser, Central Business Districts; Bonu Sulaiman Saanu, Special Adviser, Arts and Culture; Oluwatoyin Fayinka, Special Adviser, Ministry of Transportation; Oladele Ajayi, Special Adviser on Commerce and Industry;Tokunbo Wahab, Special Adviser, Ministry of Education; Solape Harmmond, Special Adviser on Sustainable Development Goals and Mr. Olatunbosun Alake, special adviser Innovation and Technology.
Speaking at the event attended by dignitaries, including party leadership, members of the Lagos Assembly, members of Governor Advisory Council (GAC), traditional rulers, top civil servants, relations and well wishers of the new appointees,  Governor Sanwo-Olu congratulated the appointees, describing their appointment as well-deserved.
According to him, it is a “testament to your capacity, your accomplishments and your track record of hard work, commitment, dedication and professionalism in your private and public endeavors.”
The governor said the men and women would assist him in discharging the functions of the Executive arm as members of the State Executive Council, adding: “I gladly welcome these men and women who shall valiantly lead this new administration to realize its vision for a Greater Lagos.”
“Today, you are inducted into a singular administration, unique in its diversity – both of heritage and of creed – made up of technical and politically skilled men and women who understand the challenges of our State, grasp the grand vision of this new administration, and are sensitive to the yearnings of our people, the citizens of Lagos State whom we must ultimately serve,” Governor Sanwo-Olu stated.
The governor lauded the legislative arm headed by the Speaker, Hon. Mudashiru Obasa, for presiding over a swift and decisive screening and confirmation process.
The governor, while reiterating his administration’s goal to ensure that Lagos State remained one of the top destinations on the African continent to live, work and invest in, said the government was, however, fortunate to have a foundation on which to build from.
“The Blueprint for a new Lagos and the Development Plan (2012 to 2025) are still relevant as strategic reference materials for systematic implementation of medium and long-term policies in line with the overall vision for our state.

“However, in this administration, our task must be to accelerate the trajectory of growth and development of Lagos State embarked upon by the administration of Asiwaju Bola Ahmed Tinubu and built upon by successive administrations.
“I am happy to note that the Deputy Governor and I, as well as some of you,  have had the honour and privilege of being part of that process. Today, providence has entrusted us with the great responsibility of ensuring that the vision of the Blueprint and the Development Plan comes to pass wholly and completely,” he said.
The governor urged the appointees to prepare for challenges ahead, reminding them that their appointment was a unique privilege and a call to service that must not be seen as an opportunity for self-service.
He further urged them to discharge the responsibility that would be assigned to them with transparency, accountability, fairness and value for money.
“I, therefore, implore you to earnestly commit yourselves to the agenda and vision of this administration, be prepared to pay any price, bear any burden, meet any hardship, and support or oppose whomever you must, in order to accomplish our grand ambition of building one of the great cities of the 21st Century, a beacon of social, commercial and political excellence for the rest of our dear nation.
“The challenges we face as a megacity whether in the areas of security, waste management, transportation, or environmental sustainability are not peculiar to us. But they are the undesired consequences of an ambitious and growing economy providing opportunities for people to realize their dreams. But they must surely be addressed before they undermine our achievements and hinder our progress.
“Great opportunities for employment and wealth creation can only be realized sustainably if we are able to enhance governance with creativity, innovation and technology while embracing collaboration with the private sector and continual dialogue and partnership with all relevant stakeholders,” Governor Sanwo-Olu said.

NUT calls for recruitment of teachers in Edo public schools