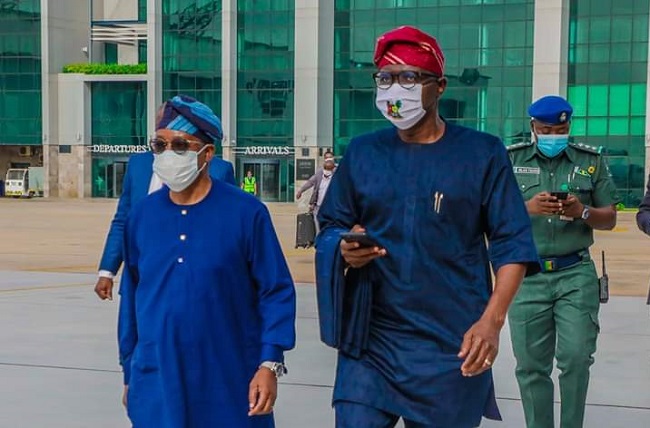 The duo made the call on Wednesday while speaking at the 20th National Women’s Conference organised by the Committee Of Wives Of Lagos State Government Officials (COWLSO) currently being led by the wife of Lagos State governor, Dr Ibijoke Sanwo-Olu, with the theme: “Exploring the Possibilities in a New World,” held virtually in Lagos.

This was just as the two governors urged Nigerian youths protesting against police brutality with #EndSARS slogan to remain calm and allow their elected representatives take up the challenge from where they left off, assuring that the government was ready to do things differently and positively.

Osun State governor, Oyetola, who was the guest of honour at the conference, noted that women’s role in the society cannot be overemphasized, saying they should be adequately supported in their various endeavours to promote strong family mental wellbeing and economic growth.

The governor remarked that this year’s theme was an apt strategy by women to live up to their expectations as the bearers and managers of lives to swiftly mobilise and prepare humanity to find solutions to the challenges that COVID-19 had thrown at mankind and explore opportunities inherent in the New Normal, expressing delight that COWLSO had been collaborating and strategising in the past 20 years to empower women and youths to contribute to the development of Lagos State, the nation and mankind in general.

“It is also heartwarming that they have demonstrated ingenuity and resilience by adapting to the realities of the moment through the hosting of a maiden virtual Conference to prepare and equip women and youths with the requisite skills and competencies for survival in this post-COVID-19 era.

“As mothers and society builders, women constitute the best vanguard for propagating the strategy and the content of the New Normal to the rest of the society, especially our youths who constitute about 60 per cent of our population. The best way to help them to perform their roles properly is to equip them with the requisite skills and knowledge in conferences like this,” the governor said.

Oyetola, while encouraging women across the state and the nation to follow the COWLSO example in order to abide by the New Normal, and turn the challenges posed by Covid-19 pandemic to opportunities and win the war against the global monster, pointed out that the Covid-19 realities had redefined and expanded the essence and importance of technology and knowledge in the New Millennium.

According to him, there is no doubt that knowledge and technology are the tools given by God to mankind in the 21st Century “to subdue the earth,” urging that mankind owed it a duty to convert the opportunities offered by these two magical tools to explore the possibilities in the new world, even as he urged “all the participants to apply the knowledge and outcomes of this conference for our collective good.”

Speaking further, Governor Oyetola pleaded with the country’s youths currently protesting against police brutality to remain calm and allow their elected representatives to take up the challenge from where they left off, adding: “We are convinced as leaders and we are ready to join the voice of reason to make Nigeria a better place.”

The governor lauded the First Lady of the Federal Republic of Nigeria, Mrs Aisha Muhammadu Buhari, who is the Mother of the Day, for being part of the occasion, while wishing “all the resource persons and participants a rewarding and stimulating session.”

Also speaking, Governor Sanwo-Olu expressed delight that the COWLSO’s annual women’s conference had had a positive impact on women in the state, as they had made an impact on the political and socio-economic growth of Lagos and country.

The governor, while charging them to participate vigorously in the conference and become better equipped to take their place in the world, said it was his desire to see them inspired by the life of another fellow Nigerian, and former Minister of Finance, Dr. (Mrs.) Ngozi Okonjo-Iweala, “who is one of the last two contenders for the position of Director-General of the World Trade Organization.”

“Her nomination and eventual advancement to the final round of the selection process should tell you that the global stage is ready for Nigerian women, the question is: are you ready to make history by exploring the possibilities in a New World?

“You have a stake in the prosperity of our society. I hope this conference galvanizes you to take action where necessary in order to fulfil your God-given potential. I am convinced that you will courageously continue to play your part in the development of our society while doing all you can to improve your lives and families,” Sanwo-Olu said.

Earlier, the Chairman, Committee of Wives of Lagos State Officials (COWLSO), Dr. (Mrs.) Claudiana Ibijoke Sanwo-Olu said the body is a strategic community-based gender organization established principally to support officials of the Lagos State government to fast-track growth and development, with the aim of improving the welfare of Lagosians.

Speaking on the ongoing protests across the country, she assured the youths that their demands with regards to police reforms would be implemented by the government, saying COWLSO was also in support of ending police brutality in the country.

“As mothers, we observe things before we speak but we are aware of the situation in the country. We thank God for Lagos State and the cabinet for listening to the plight of the youth.

“As members of COWLSO, we support ending police brutality. I know Mr President is aware of the demands of the youths with regards to police reforms which they have said would be implemented. I believe we shall overcome,” Dr Sanwo-Olu said.

A Kano based industrialist, Chief Kalu Ogbonnaya, has advised the Federal Government to take necessary steps to stimulate the nation’s economy to prevent a recession post COVID-19…support for women empowerment