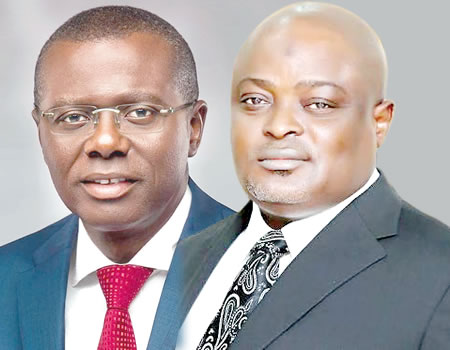 Lagos State governor, Mr Babajide Sanwo-Olu and the Speaker, Lagos State House Of Assembly, Hon. Mudashiru Obasa, has stressed on the need for collaboration and understanding between the executive and legislative arms of government in order to bring about seamless governance and efficient service delivery.

Both the governor and speaker said this on Wednesday at the opening of the 3-day 15th Executive/Legislative parley organised by Lagos State Government Office of Civic Engagement with the theme: “Harmonious Relationship Among Various Arms Of Government,” which took place at Ikota-Lekki area of the state.

The parley had in attendance lawmakers from the Lagos State Assembly, Senators and House of Representatives members from state, state exco members, Lagos chapter of APC leaders, among others.

Governor Sanwo-Olu said the main objective of the parley was to appraise governance in the state and how both arms of government can continue to collaborate to realize the Greater Lagos dream of all Lagosians.

“It is a working relationship that will bring about development and governance that will be seamless for our people and at the end of the day, we would have a progressive and hitch-free understanding of ourselves once we realize that the roles and responsibilities are different.

“We are here to iron out and resolve things that are very contentious or if there is any advice we need to give ourselves and at the end of the day our citizens will be the beneficiaries,” he said.

According to him, the whole essence is to bring about positive and quality governance representation at the highest level of the people where people will feel the dividends of democracy and the state will continue to experience purposeful development.

“So it makes governance in itself seamless and a win-win situation for all of us at the various level of governance,” he declared.

Speaking further, Governor Sanwo-Olu said the parley was also for state representatives at the National Assembly to acquaint the state with critical issues that they were facing at Abuja and also see what they could do to address some issues critical to the state at the federal level.

“It is also an opportunity for our party leaders to remind us of the promises we made to the people as well as the party manifesto and to ask us how we are faring.

“So, at the end all of us will be better enriched, geared and motivated to go out there and deliver all the dividends of democracy at all levels of governance, and we will continue to ensure that we foster a working relationship and understanding that everybody has a role to play and giving everybody the deserved respect and opportunity for everybody to begin to do well and play their role in governance and greater Lagos conversion that we are talking about,” he added.

Speaker of the Lagos State House of Assembly, Hon. Obasa, who fielded questions from journalists, thanked the governor for sustaining the parley, saying it was a platform for a harmonious working relationship “where information, understanding and collaboration is a major factor in all that we are doing.”

The speaker said the parley would enable them to continue to build on what they had achieved, pointing out that the legislature was supportive of the executive arm and would continue to do that to ensure that both served the people.

He, however, said such a relationship would not make the legislature turn a blind eye to something it felt must be looked into.

“We are supportive of the executive arm and we will continue to do that to ensure we serve our people, but that does not mean we will turn a blind eye to something we feel we must look into,” Obasa said.

Obasa said the state Assembly needed the collaboration of the state representatives at the National Assembly in its bid to amend the constitution to achieve some of the things it had been clamouring for.

According to him, these include special status for Lagos, state police and a transportation system that will allow the state and neighbouring states to connect together, declaring: “We need them to push that through.”

The Special Adviser, Office of Civic Engagement, Princess Aderemi Adebowale, in her address, said the state had been very fortunate to have been governed by passionate leaders, noting that the gathering was designed to share experiences and explore inherent benefits in running an inclusive government devoid of rancour.

“These MDAs shall be shedding light on their operations as relating to the attainment of the goals of the present administration,” she disclosed.