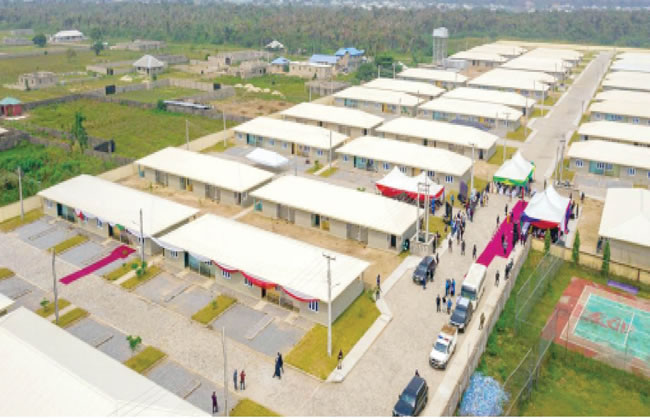 As part of efforts to reduce housing deficit in the metropolis, the Lagos State Governor, Mr Babajide Sanwo-Olu, said that his administration has gone into joint ventures to deliver affordable houses across the state.

The governor stated this while inaugurating the 252 environment-friendly affordable public housing schemes in Badagry, at the weekend.

The estate sits   on an expanse of 12.5 hectares in Idale, Badagry, with glittering infrastructural facilities.

Inaugurating the estate to the admiration of Badagry people,  Sanwo-Olu said he acknowledged the effect of housing on the socio-economic  wellbeing of the residents, which was why his administration went into a joint partnership with a private investor to deliver 252 housing units of two-bedroom terrace bungalows for low and middle income families.

He said the housing scheme was designed with eco-technology and EDGE Advanced protocol, which is a green building certification that makes building to be more resource-efficient.

“This housing scheme has come with the lowest of prices, which make its affordable to the targeted population. The payment plan will be spread over a longer period of time, I thank our development partner, Echostone for supporting the state government in this regard,” the governor said.

Lagos State Commissioner for Housing, Mr Moruf Akinderu-Fatai, said the construction was based on an innovative building technology that supports housing production within optimal time at reduced cost.

According to him, land on which the scheme was sited was provided by the state government, while the partner built the homes with the supervision of the ministry

He said: “The estate is an evidence of the state government’s avowed commitment to making Lagos, a 21st Century economy by providing decent homes for the citizens.

“The project is unique because it is the first green estate to be owned by the state government. Lagos State Affordable Public Housing Scheme, Idale, is an eco-friendly housing scheme as each house comes with two trees and a garden.”

Also, the commissioner explained that the homes could be easily maintain because the designs that supported energy efficiency in terms of power and water usage.

He added that the estate had state of the art infrastructure such as water treatment plant, central sewage treatment plant, street lights, open spaces for community activities, road network, drains and perimeter fence.