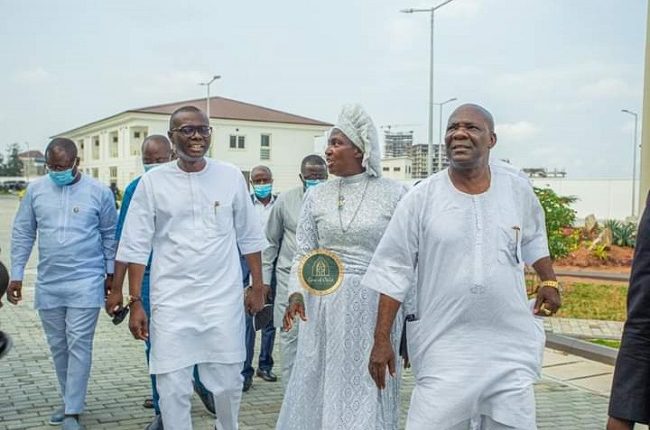 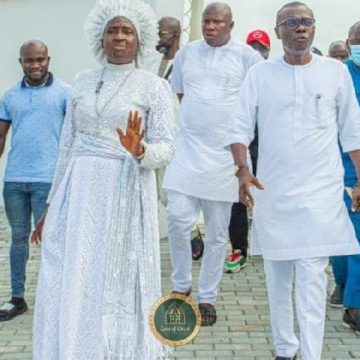 The Executive Governor of Lagos State, Mr Babajide Sanwo-Olu, on Tuesday, paid an unscheduled visit to inspect the state-of-the-art church auditorium of the Cathedral of Love of Christ Generation Church, Cherubim and Seraphim, Victoria Island Lagos, built by popular cleric-cum-philanthropist, Reverend Esther Abimbola Ajayi, in the heart of Lagos.

Sanwo-Olu would be the third personality that would be visiting the new edifice auditorium ahead of its forthcoming dedication and grand opening on September 5, according to the cleric, fondly called Iya Adura.

The Spiritual Head of The Celestial Church of Christ Worldwide, His Eminence Rev.Pastor Mobiyina Emmanuel Oshoffa, and the Supreme Head of the Cherubim and Seraphim Unification Church of Nigeria, His Most Eminence, Prophet Dr Solomon Adegboyega Alao, had earlier paid a different visit to the new auditorium.

The cleric and her husband, Reverend Dr Ademuyiwa Ajayi, graciously received Governor Sanwo-Olu as they led him and his team around the multi-million naira edifice.

They also seized the event to pray for the governor, saying, “God grants Sanwo-Olu long life, good health, and strengthens him more in delivering the dividends of democracy to the people.”

In spite of the huge investment in the water sector by the government and international organisations, water scarcity has grown to become a perennial nightmare for residents of Abeokuta, the Ogun State capital. This report x-rays the lives and experiences of residents in getting clean, potable and affordable water amidst the surge of COVID-19 cases in the state…    Sanwo-Olu inspects Reverend Esther Ajayi’s new church auditorium in Lagos

The Lagos-Ibadan railway was inaugurated recently for a full paid operation by the Nigerian Railway Corporation after about a year of free test-run. Our reporter joined the train to and fro Lagos from Ibadan and tells his experience in this report…  Sanwo-Olu inspects Reverend Esther Ajayi’s new church auditorium in Lagos