• Assures Nigerians youths on govt's sincerity on banning of SARS 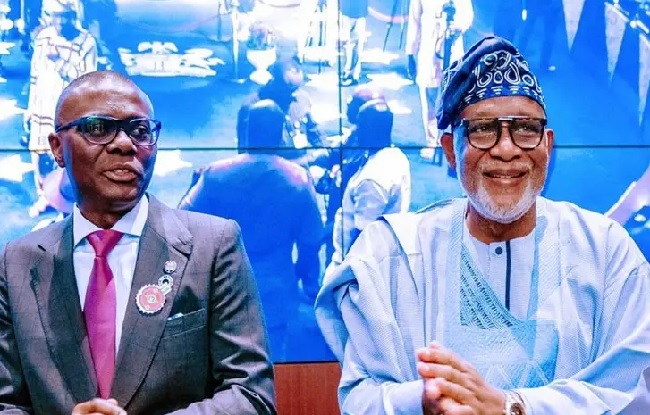 Sanwo-Olu, who is the chairman of the All Progressives Congress (APC) National Campaign Council for Ondo State Governorship Election, said Akeredolu’s success in the poll exercise was a validation of people’s acceptance of his administration, having impacted positively in their lives during his first term in office.

The governor said this while addressing newsmen shortly after he received a rousing welcome from members of the cabinet, enthusiastic Lagosians as well as traditional dancers at the local wing of Muritala Muhammed International Airport.

The plane that brought the governor and his entourage to the airport touched down past 6 pm.

Sanwo-Olu, who commended President Muhammadu Buhari and the Independent National Electoral Commission (INEC) for the successful outcome of the poll exercise, said Akeredolu’s victory was a clear manifestation that the APC remained the party of choice for Nigerians, stressing that the party would continue to work in the best interest of
Nigerians.

“I must congratulate my brother, Governor Akeredolu for being victorious in last Saturday’s election. His victory across the state is a confirmation of the trust and belief of the people in the APC led administration in Ondo State, having benefitted immensely from the various people-oriented programmes of his administration.

“The victory is for all of us and for the entire leadership of our party. It is teamwork; it is not one person, it is a whole team that came together. And what it means is that when we all work together as a team, we win together.

“The real winners at the end of the day are citizens of Ondo State because indeed they have re-elected a “talk and do” governor. The victory is deserving.

“Looking at the performance of Governor Akeredolu in Ondo State, it is clear to me that Ondo people know what is right. And they have done what is right by giving him an opportunity to continue his good work.

“Our victory in Ondo State is an assurance to us that we are doing something right. We know there are areas of improvement and we are determined to ensure that we give Nigerians the best they deserve,” the said.

The governor, while commending President Buhari for creating a level playing ground for the conduct of the election, said he deserved commendation for deepening democracy and electoral process in Nigeria, considering the success recorded in the Ondo governorship election as well as last month’s gubernatorial poll in Edo State.

He also commended the Vice President Yemi Osinbajo, the caretaker chairman of APC and governor of Yobe State, Mai Mala Buni, his colleagues and other party leaders, especially members of the National Campaign Council for working tirelessly for the victory of APC in the Ondo guber poll.

“I appreciate the leader of our party, President Muhammadu Buhari; Vice President Yemi Osinbajo, the caretaker chairman of our party, the governor of Yobe State, my colleagues and other APC leaders, especially members of the National Campaign Council for working tirelessly for the victory of our party in the Ondo State governorship poll.”

Governor Sanwo-Olu, while reacting to the disbandment of Special Anti-robbery Squad (SARS) by the Inspector General of Police (IG), Mohammed Adamu, said it was a victory for the youths of Nigeria.

The IG had announced the move on Sunday, following sustained nationwide protests against the Anti-Robbery squad.

According to the governor, the said the protests held at different locations within Lagos show the beauty of democracy and that people have the right to express their views.

He commended the youths for being very peaceful during the protest, and promised that the government meant business about the disbandment of SARS, urging them not to doubt the government’s sincerity as it was the first time, the government would be disbanding the group.

The governor, who assured the youths of his full support on their demand as he would not sit back and allow any residents to be maltreated, further assured that government was very clear on the disbandment, reasons there were measures that would be taken afterwards.

He disclosed that he had spoken with the Commissioner of Police and the state Director of the Department of State Security Services (DSS), on the way forward.

International day of the Girl-child: Expert emphasizes on importance of education