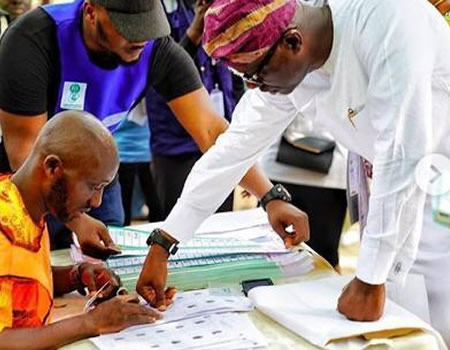 Share
Governorship candidate of All Progressives Congress (APC) in Lagos, Mr Babajide Sanwo-Olu, on Saturday cast his ballot at his Polling Unit, 019, Lateef Jakande Road, Ikoyi, Lagos.
Sanwo-Olu, who spoke with newsmen shortly after exercising his franchise, said he was sure of victory in the election, describing the exercise as peaceful.
Sanwo-Olu, a former commissioner for establishments and training in the state, said he was confident of securing a win,
having in the last few months met with various stakeholders across the sectors of the economy.

The governorship candidate, who acknowledged receipt of reports of the late arrival of INEC staff and election materials in some parts of the state, said it was a temporary setback that would be overcome.
He said he equally had a slight delay casting his vote as a result of malfunctioning of the card at his polling unit the matter was later resolved, enabling him and his wife to vote at about 11 am.
Meanwhile, the turnout of voters at the polling unit, where APC lost to the main opposition Peoples Democratic Party (PDP) during the last Presidential national and National Assembly elections was low on Saturday.
Sanwo-oluVictory
Share