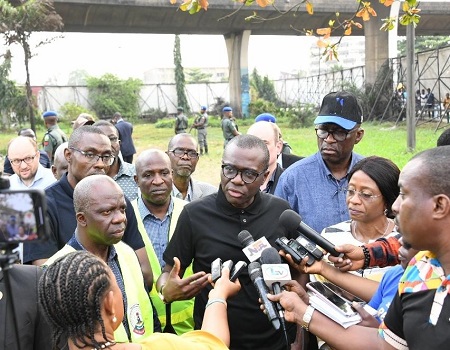 Lagos State governor, Mr Babajide Sanwo-Olu, on Wednesday, announced the closure of parts of Eko bridge in the early hours of the day, saying the step taken was for the safety of the residents and motorists who use the bridge as well as to pave the way for maintenance works to be done on the failed portions.

Governor Sanwo-Olu stated this while speaking at the Costain area of Iganmu during an Inspection of the defective portion of the bridge.

Sanwo-Olu was accompanied to the site by some state government officials and the Federal Controller of Works, Adedamola Kuti.

The governor said the decision to partially close the bridge in the early hours of the day was taken after he received a report on its condition on the need for a thorough engineering investigation to be conducted, which will ultimately lead to the commencement of repair works.

Sanwo-Olu said it had become necessary for the government to take precautionary measures, insisting that the Eko Bridge and others in the state must be repaired, even as he assured that the contractors would get to work to see how maintenance could be carried out in the shortest time possible.

The governor, while lamenting the manner Lagos bridges have been abused, assured that the State’s Ministry of Transportation would ensure that the traffic rules and principles were followed.

“I want to reiterate and to assure Lagosians that both the Lagos State government and the Federal Ministry of works will get to work very quickly and we’ll see how quickly we can remedy the current situation.

“These are bridges that are not also made for us to have dead weight on them and what do I mean by dead weight, all the heavy trucks and containers that we parked on them. They are not designed for such usage.

“And so what we will do is to go back with our Ministry of Transportation, and do a full traffic impact assessment. And we will see where we can advise our commuters on how to go about their vehicular movement just as we provide adequate alternatives,” the governor stated.

Sanwo-Olu urged commuters in the state to be patient and obey traffic officers as they direct people on road diversions to alternative routes while maintenance work is being carried out.

The governor stated that although the bridge is a Federal Government asset, the state government had a responsibility to maintain them for the use of the residents.

Speaking earlier, Kuti stated that maintenance of the bridge was a continuous thing to do, adding that the government was committed to carrying out rehabilitation works on worn-out bearings noticed between Alaka and Costain portion inwards Apongbon of Eko Bridge.

While stating that the bridge, constructed in the 70s was no longer safe for commuters, Kuti assured that a detailed investigation would be carried out in that regards.

“This is Eko Bridge and we just discovered that the bearings are gone, especially on this particular pair. So the bearings are broken, and we are having a problem with the bridge deck. As a matter of fact, the bridge is no longer safe for public use.