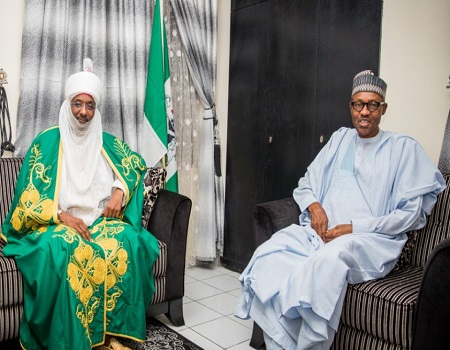 Former governor of Kano State, Rabiu Musa Kwankwaso has alleged that Governor Abdullahi Ganduje removed Muhammadu Sanusi 11 as Emir of Kano on with the consent of President Muhammadu Buhari.

He made the allegations while speaking with the BBC Hausa Service on Wednesday morning.

Kwankwaso who was the former Minister of Defence noted that “the governor of Kano himself has been saying that he has been given orders to remove Sanusi,”.

Kwankwaso berated the recent statement credited to the President that he was not involved in the crisis between the former emir and Ganduje, saying, “President Buhari is getting involved in the affairs of Kano state.

According to the former governor,’ if he(President) said his not aware, people on the side of Ganduje are openly saying, the removal of the former king ordered from Buhari.

Even though Kwankwaso did not provide evidence to BBC during the interview, but he noted that the former king was removed with the consent of Buhari

The former Governor also denied claims by the Kano State Government that he issued two letters of warning to Sanusi while he was in office.

“I have never given the Emir any warning letter or anything like that.”

He also denied the claim that his supporters under the Kwankwasiyya movement, were responsible for the soar relationship between Sanusi and Ganduje.

According to Kwankwaso, his supporters were only after the truth and were angry with Ganduje because of the outcome of the 2019 Kano gubernatorial election, which was rigged against to favour the ruling All Progressives Congress, (APC).