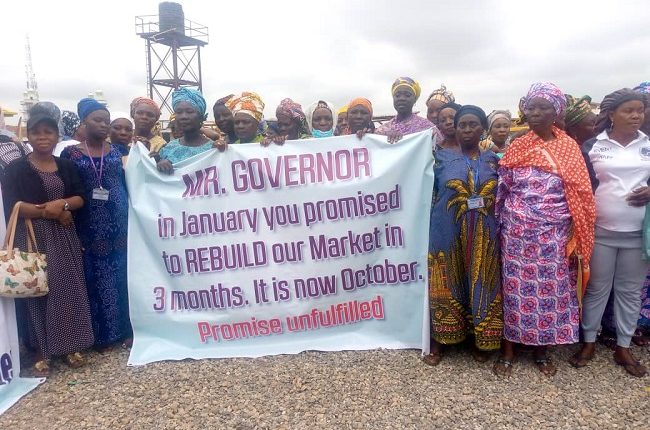 Hordes of market traders under the aegis of Akarigbo Market Traders, Sabo, Sagamu, on Thursday, protested against government insensitivity and failure to rebuild enough market stalls after the market got burnt last year January.

The market traders armed with banners bearing different messages such as “Mr Governor Save our Souls, Our Members Are Dying” Mr Governor, Fulfill Your Promise, Help Rebuild Our Market” among others marched through the Akarigbo road to the Palace of Akarigbo and Paramount ruler of Remo land, Oba Babatunde Ajayi as well as the secretariat of Sagamu local government.

Speaking with journalists during the protest, the Secretary of Akarigbo Market, Sabo, Mr AbdulRahamn Ojuolape, said the essence of the protest was to register their displeasure with how the state government has handled the rebuilding of the market.

AbdulRahamn said that though after their peaceful protest over this shabby treatment from the state government, a year after the fire incident which affected over 3000 traders destroying goods worth of millions of naira, the government came around and constructed 188 lock up shops and open stalls.

He explained further “while we thank the government for the little it has done, it is just obvious that the lock-up shops and stalls are far cried to what the traders need. The inferno affected over 3000 traders and you are building for us 188 shops, how do we allocate this?

“Many of our traders have been doing their businesses under the sun since the unfortunate incident, many have even died because of the harsh weather they are subjected to couple with loss of their capital. It has really been a trying time for us.

“And the government came around, cleared everywhere and build just 188 shops for us, this is unacceptable and this wasn’t what the governor promised us. We are therefore pleading with the governor, Prince Dapo Abiodun to please come to our aid and rebuild the market, the space is there, the governor should please as a matter of urgency heed our call because the people are not happy at all.”

Answering questions on whether the state government had compensated the traders for the losses suffered during the inferno, AbdulRahamn disclosed that the compensation did not only come very late but was also too little compared to the magnitude of the losses suffered.

He revealed further that it was even painful to note that only about N5m was shared to the affected traders when the information at their disposal said that the government released over N20m urging the governor to please launch an investigation into this act of corruption against the officials saddled with this assignment.

Speaking in the same vein, Mrs Kemi Ogunnowo equally said that the traders in the market have been exposed to untold hardship and severe pains since the market got burnt saying that the hardship had been responsible for the untimely deaths of many of the traders.

Mrs Ogunnowo said: “We are really sad that the governor has not fulfill his promise of helping to rebuild the market. The fire incident affected over 3000 traders and the newly built lock up shops and stalls are just 188, what become of the rest? Will they continue to stay under the sun and rain?

“And as women, the market has been our own source of livelihood, all we use to train our children and support our husbands are derived from our business here in the market. The governor, Prince Dapo Abiodun should please help us to rebuild the market such that all that were affected would have their shops back.”

The Chairman of the local government, Hon Afolabi Odulate, has however declared that the government was well aware of the plight of the traders and was already taking steps to address their grievances pleading that the traders should exercise bit of patient with the government.

Odulate said: “I must have met twice with the traders and I have told them to be a bit patient with the government. I am already talking to the Commissioner for Housing to let the local government take upbuilding of the rest shops for the market and they have agreed. We have even done the proposal which we hope to take to Abeokuta by Monday, so we are with the traders and we shall do all things to make life more comfortable for them.”