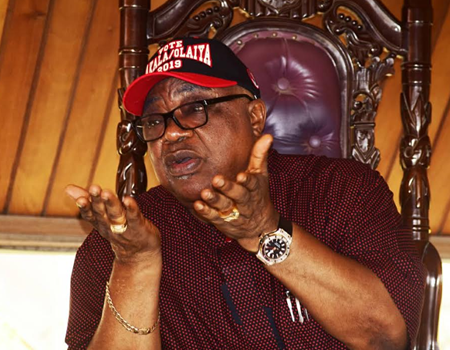 Former Governor and Chairman Reconciliation Committee of the All Progressives Congress (APC) in Oyo State, Otunba Adebayo Alao-Akala, has said the judgment of the Court of Appeal in favour of the Peoples Democratic Party (PDP) led State Government does not vitiate or detract from the fact that the sacked council chairmen, vice-chairmen and councillors were validly elected by the people.

Alao-Akala in a statement he personally signed and made available to journalists in Ibadan, on Thursday, said the Appeal Court in its judgment decided to discount the merit of the case.

The statement in part read: ”The outcome of Federal Court of Appeal sitting in Ibadan came as a rude shock to both the APC family and the people of Oyo State who massively voted for the illegally sacked council chairmen, vice-chairmen and councillors. The judgment will be a major setback to our democratic process if left unchallenged.

“I strongly enjoin our teeming members not to feel disappointed with yesterday’s judgement. To me, it was a temporary setback. We have a good case; therefore we shall rally all the necessary supports for Oyo ALGON to proceed to the Supreme court to seek redress and achieve victory for our party.”

“Based on the merit of the case and the precedent rulings, I’m confident that the Supreme court will reverse the miscarriage of justice delivered at the Ibadan appellate court.”

Otunba Alao-Akala concluded the statement by saying Oyo APC will be reunited and repositioned with a view to coasting home victories in the 2023 general elections.”

South-West States Declare Readiness For 2020 WASSCE
Commissioners of education of the six South-West states of the country have expressed readiness to sit their respective Senior Secondary School three (SSS3) students for the 2020 West African Senior School Certificate Examination… Read Full Story
No WASSCE For Nigerian Students Now, FG Insists
The Federal Government, on Wednesday, insisted that its decision not to allow the reopening of schools because of the coronavirus pandemic remains unchanged as it maintains that it is not confident about the safety of students at this time… Read Full Story