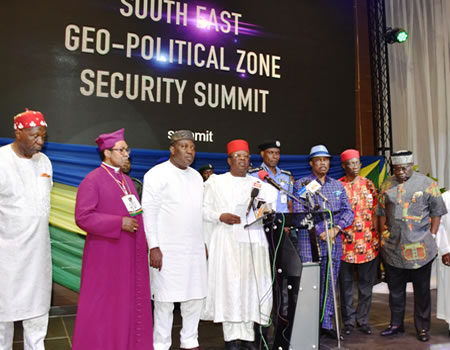 THE President-General of Ohanaeze Ndigbo, Chief John Nwodo, has called on the Federal Government to declare herdsmen who indulge in the killing, maiming and kidnapping of people in the South-East zone and other parts of the country as terrorists.

Chief Nwodo, while speaking in Enugu on Wednesday at the South-East geopolitical zone security summit organised by the Nigeria Police, also said the people of the zone have little or no confidence in the police, saying the introduction of community policing is good but would be dead on arrival if the state governors are not allowed to control the security architecture of their states, especially having a say in the recruitment of commanders and heads of the community police.

Nwodo whose remarks were interjected with an ovation from the audience further wondered why heads of security operatives, particularly the police in Igboland are non-indigenes, stressing that Ndigbo has qualified men and women to head strategic positions in the police and the military.

In his remark, the Archbishop of Enugu Ecclesiastical Province, Most Right Reverend (Dr) Emmanuel Chukwuma, said the state of the nation today is frightening and devastating.

According to him, “the worst is that today, Reverend Fathers are being kidnapped; religious leaders are in danger and church premises are now in trouble. We begin to ask ourselves, why is it so? If this should continue and we pray God to send his angels down, Nigeria will be in confusion. So, we want to appeal to you to help us in this strategy for peace to reign in our community.

Also speaking, the chairman of the  South-East Governors’ Forum, Chief David Umahi of Ebonyi State, on behalf of his colleagues, pledged their commitment to support Federal Government’s community policing initiative meant to pragmatically involve community dwellers in the security network.

Umahi, who read the resolution of the governors, said in reaching the arrangement, the forum took cognizance of various grass-roots security outfits such as ‘Operation Kpochapu’, forests guard, vigilance group and neighbourhood watch already in existence in the zone, which operate close to the model of community policing.

Earlier, the Inspector-General of Police, Mr Mohammed Adamu, had noted that he instituted the geopolitical security summit due to the increasing complexity of crimes and the challenges of policing in a vast and diverse country.

Adamu said the meeting would engender public trust, consent and partnership that remained the foundation upon which policing rests.

All the South-East governors except Senator Hope Uzodinma of Imo State, who was represented by his deputy, attended the summit.