Entertainment
By Tribune Online On Mar 29, 2019 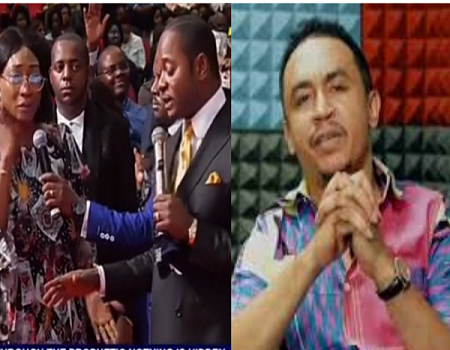 Recently, social media was on `fire’ with the viral video of Pastor Lukau allegedly raising a dead man from the dead and feeding him thereafter.

However, the acclaimed ‘wonder’ was proven otherwise, when the funeral houses embroiled in the fake miracle opened up and called out the pastor for deceiving them and using their hearse to fake a miracle.

In a related development, Okoye is seen in a viral video visiting the controversial church, with Lukau making some prophecies which reduced Okoye to tears.

Speaking to the actress the Pastor said: “I speak acceleration. Somebody is gonna help you because there are people we gonna root out.

At some point, he asks: “Is this your daughter?” and the Nigerian actress replied in affirmative.

Without being told, the pastor mentioned that the child’s name is “Chibuike Crystal” and Oge was visibly impressed by his ability to tell her daughter’s name.

Meanwhile, Daddy Freeze has now posted the video on his Instagram page, shading the actress for going to the church, with a challenge tilted, #OgeOkoyeChallenge, offering N100,000 for winners of the challenge.

ALSO READ: Be yourself at work — It’s healthier and more productive

He wrote; Alph Luka final gets a real actor as Oge Okoye visited him. Alph is the same pastor responsible for Elliot’s resurrection.

“The Oge OKOYE Challenge starts tomorrow from 10 am! Another 100k is up for grabs! 5 people will each receive 20k for acting the best Oge Okoye and Alph Lukau scene.”

Consequently, the challenge by Freeze has generated mixed reactions on social media, with many of his followers indicating interest to participate in it, while others slammed him.

An IG user, @tamarra_pree wrote: “She was probably paid to act this shit to deceive those folks in that house, big shame.

Also, @teamitepu said “You’re the Moses of our time daddyfreeze, thanks for your good work.

@richie_showbiz wrote “ wanna be in what? I am neither an actress nor a musician so what do i “wanna be” and why are u so bitter?

“ If she is related to u, go tell her to stop embarrassing her ancestors and u go get a life instead of coming here to show us the level of ur stupidity.”

Lolo_musiq said: “She’s clearly going through some stuff and I pray she finds peace and healing.”

However, @crown_luxautos wrote: “@daddyfreeze you know yourself this is a very old video, long time before Lukau waking up a dead man scandal.

“I like your campaign but you are joining the crew of those deceiving pastors calling themselves men of God.”

BREAKING: Buhari, Osinbajo in closed door meeting with CAN

Hushpuppi: Daddy Freeze defends himself as Nigerians continue to react