Russia’s military says it may have killed IS leader Baghdadi

by Tribune Online
in World News
Reading Time: 4 mins read
A A 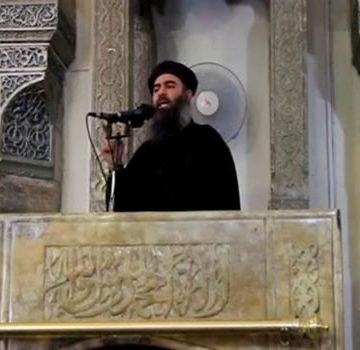 MOSCOW said on Friday its forces may have killed Islamic State leader Abu Bakr al-Baghdadi in an air strike near the Syrian city of Raqqa last month.

There was no initial independent confirmation that Baghdadi had been killed. The US-led military coalition fighting against Islamic State said it could not confirm the death, and several Iraqi officials told Reuters they were skeptical.

The secretive Islamic State leader has frequently been reported killed or wounded since he declared a caliphate to rule over all Muslims from a mosque in Mosul in 2014, after leading his fighters on a sweep through northern Iraq.

If the report does prove true, it would be one of the biggest blows yet to Islamic State, which is trying to defend its shrinking territory against an array of forces backed by regional and global powers in both Syria and Iraq.

The Russian Defense Ministry said on its Facebook page that it was checking information that Baghdadi was killed in the strike, which it launched after receiving intelligence that a meeting of Islamic State leaders was being planned.

“On May 28, after drones were used to confirm the information on the place and time of the meeting of IS leaders, between 00:35 and 00:45, Russian air forces launched a strike on the command point where the leaders were located,” the statement said.

My journey a testament to my mum’s US dream —Amanda Azubuike, US Army’s new Brigadier-General

“According to the information which is now being checked via various channels, also present at the meeting was Islamic State leader Abu Bakr al-Baghdadi, who was eliminated as a result of the strike,” the ministry said.

However, a colonel with the Iraqi national security service told Reuters Baghdadi was not believed to have been in Raqqa at the time of the strike in late May. One of Baghdadi’s aides may have been killed rather than Baghdadi himself, the colonel said.

He said that Baghdadi was believed to be operating cautiously in the border area between Iraq and Syria with just a handful of close aides, and avoiding using telecommunications equipment to evade surveillance.

Another Iraqi intelligence official said the Russians had not shared any information with Iraqi authorities to indicate Baghdadi was killed. Iraq was checking the report and would announce his death if it received “solid confirmation”.

Hoshiyar Zebari, a long-serving former Iraqi foreign minister and now a senior adviser to the government of the Kurdish autonomous region, also told Reuters there was no confirmation of Baghdadi’s death.

The Russian defense ministry statement said the strike was believed to have killed several other senior leaders of the group in addition to Baghdadi, as well as around 30 field commanders and up to 300 of their personal guards.

The IS leaders had gathered at the command center, in a southern suburb of Raqqa, to discuss possible routes for the militants’ retreat from the city, the statement said.

The United States was informed in advance about the place and time of the strike, the Russian military said.

Islamic State fighters are close to defeat in the twin capitals of the group’s territory, Mosul in Iraq and Raqqa in Syria, after nearly three years ruling over millions of people in a wide swathe of territory in both countries.

Born Ibrahim al-Samarrai, Baghdadi is an Iraqi in his mid-forties, who broke away from al Qaeda in 2013 after years participating in the insurgency against U.S. forces in Iraq and the Iraqi government. The U.S. State Department has offered a $25 million reward for information leading to his arrest.

A number of senior IS figures have been killed in air strikes or special forces raids since the United States launched its campaign against the group in 2014, including Baghdadi’s deputy Abu Ali al-Anbari, the group’s “minister of war” Abu Omar al-Shishani, and its media director Abu Muhammad al-Furqan.

Rami Abdulrahman, director of the Syrian Observatory for Human Rights, cast doubt on the report Baghdadi may have been killed. He said that according to his information, Baghdadi was located in another part of Syria at the end of May.

“The information is that as of the end of last month Baghdadi was in Deir al-Zor, in the area between Deir al-Zor and Iraq, in Syrian territory,” he said by phone.