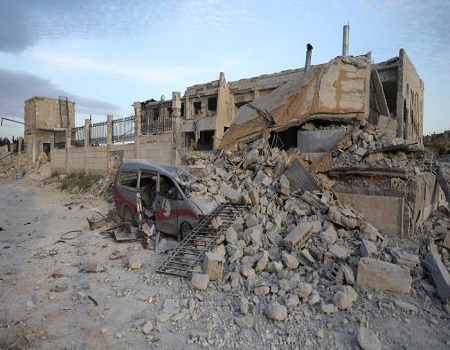 Three airstrikes by Russian warplanes hit a hospital in Syria’s north-western province of Idlib, leaving it out of service, a monitoring group said on Thursday.

The Britain-based Syrian Observatory for Human Rights said the Russian jets hit Al-Shami Hospital in Ariha city at midnight, wounding some of the staff members.

The White Helmets, a first responder group that operated in rebel-held areas, posted a video showing damage and smoke inside the hospital.

Syrian government forces backed by their Russian allies and pro-Iranian militias have been advancing into areas in the southern countryside of Idlib for the past week.

On Tuesday, Syrian government forces entered the city of Maaret al-Nouman after a multi-sided offensive as part of a ground operation in southern Idlib.

The offensive prompted thousands to flee their homes towards areas near the Syrian-Turkish border, which is already packed with refugees.

According to the UN Office for the Coordination Of Humanitarian Affairs (OCHA), between December 2019 and Jan. 27; over 388, 000 people, 80 per cent of whom women and children were displaced in north-western Syria due to shelling.