Rumblings in Osun over Oyetola’s reversal of Aregbesola’s policies 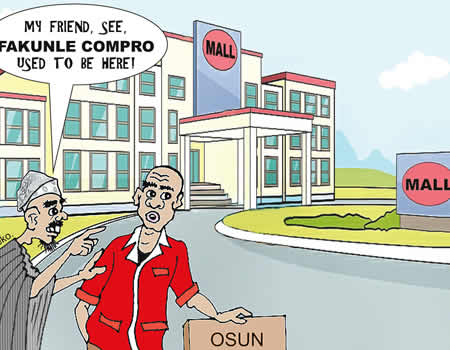 Amid report of speculated widening gulf between the Falcon, Governor Gboyega Oyetola of Osun State and the Falconer, immediate past governor and Minister of Interior, Rauf Aregbesola, over the manner the incumbent has reversed some of the polices inherited from his predecessor, OLUWOLE IGE looks at reversal of the education policy of the Aregbesola administration by his successor.

The seeming cold war between the camps of immediate past governor of Osun, Mr Rauf Aregbesola and his successor, Governor Gboyega Oyetola, may be going sour with the recent reversal of Aregbesola’s education policies by the state government.

While some stakeholders, especially the poor people of Osun State who have been most affected by government actions in the state, applauded the decision of Oyetola’s administration to reverse most of Aregbesola’s education policies, supporters and loyalists of the former governor, who is now the Minister of Interior, felt it was part of the grand plot to obliterate Aregbesola’s image in the state.

Before the reversal, both camps had been neck deep in the struggle for the control of All Progressives Congress’s (APC) structure in the state, thereby creating mild intra-party squabble ahead of the party›s congress and 2022 governorship election.

Aregbesola’s loyalists hold the notion that the policies were reversed not because they have failed to achieve desired results as claimed by Oyetola’s government, but as parts of the premeditated agenda to gradually erode the former governor’s legacies. The public outcry against some of the policies which erased the histories and traditions of many schools in the state notwithstanding, some in the camp of the former governor wholeheartedly believed the policies had served the state well and were indeed unique and uncommon as the style of their promoter.

Before making the decision public on the stoppage of schools’ reclassification, merger of schools, as well as single uniform for all public schools among others, it was obvious that some of the policies may give way, after Professor Olu Aina-led review committee submitted its report to Oyetola.

Briefing journalists shortly after the end of the State Executive Council meeting of Monday, March 2, the Osun State Commissioner for Information and Civic Engagement, Mrs Funke Egbemode, explained that the council unanimously agreed that nine of the policies should be reversed immediately, saying “Opon Imo, the only policy that survived the review, would be repackaged and reintroduced to schools.”

According to her, “the decision was reached after an exhaustive deliberation on the report of the education panel set up by the governor to review some of the extant education practices and policies. The council unanimously agreed on the 10  issues raised in the report and accepted the recommendations.

“The council approved the recommendations to revert to the 6-3-3-4 structure in keeping with the provision of National Policy on Education as this will entail adequate physical and instructional facilities at all levels, adequate provision in quantity and quality of well-motivated teachers at all levels.”

Egbemode further stated that the council, following the recommendation of the Aina panel, which was made up of  seasoned educationists, chose to accede to the yearnings of the people on the schools by allowing  «every school return to its old established and recognised public uniform,” adding that even the company set up by the previous government to service the state education sector was adjudged to have performed below expectation.

“It was also agreed that Early Childhood Care Development Education (ECCDE) in line with the practice in the 35 other states in Nigeria be restored,” Egbemode had explained.

Some other contentious policies on education were also touched by the Oyetola government in the bid to restore sanity to a sector that had consistently performed poorly, oscillating between 25th and 30th positions in the West African Examination Council (WAEC) performance index for states from 2015 to 2018 and even before then.  Other such decisions reached were the reversal of schools to their former status, whereby only single sex identified with those school names should be admitted while students already affected by the name change should be issued letter of attestation by the Ministry of Education and male students who are currently in SS1 and SS2 in schools established for female learners only should be relocated immediately and vice-versa.

It was stated that the council also approved the reversal of ‘High School› to the old nomenclature ‹Grammar School.’

Similarly, the council also approved the need for government to strengthen the technical and vocational education/training by upgrading structure and facilities of government Technical Colleges for effective service delivery, while “Opon Imo” otherwise known as tablet of knowledge will be retained and restructured to serve the purpose it was meant for.

To allay the fear of the Aregbesola support group, the government had made it clear that it was not targeting anyone and that the interest of the people of Osun was paramount to it. Addressing the press on the reversed policies, the Chief Press Secretary (CPS) to Oyetola, Mr Ismail Omipidan, had earlier pleaded with newsmen to desist from presenting the development as an action aimed at the former governor.  He explained that it was a decision taken in consideration of people’s demands, supported and backed by recommendations of the experts who at one time or the other had superintended over the nation’s as well as international education development.

The Osun State helmsman, Oyetola, while receiving the report of the Policy Review Roundtable on some extant policies in the education sector on Monday, February 24, had defended the position of his administration in reviewing some of the policies of his predecessor. According to him, “as a government, our policies and programmes are driven by citizens’ needs. These needs which were further validated by the United Kingdom Department for International Development’s (DFID)- funded Citizens Needs Assessment exercise in Osun, were harvested during the thank-you tour/town hall meetings, where the people told us in plain language that they wanted some aspects of our educational policies removed, adjusted or improved upon.”

“That was what led to the Policy Review Roundtable Summit, the report of which we are receiving today. We are prepared to do what will improve the lots of our people and protect the future of our children”, Oyetola had remarked. 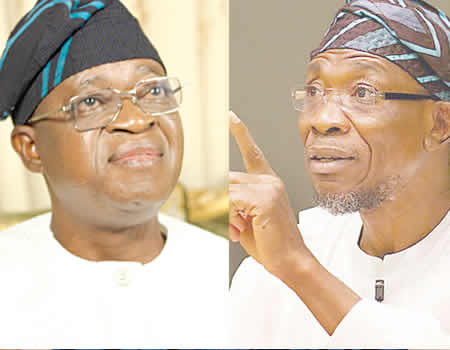 But, one of Aregbesola›s close aides in a radio programme had defended his erstwhile boss›s decisions, especially those formulated for and implemented in the education sector. Mr Kolapo Alimi, a lawyer, and Commissioner for Local Government and Chieftaincy Affairs in the Aregbesola government, during a live radio programme monitored in Osogbo, said Aregbesola›s education policies were well-thought-out by experts such as Professor Wole Soyinka and other critical stakeholders before they were introduced in 2012.

He contended that “we introduced those uniforms in 2012 and had an election in 2014, the parents of the poor students were the ones who voted for Aregbesola and we led by over 100, 000 votes. But most of the people castigating this single uniform policy are the ones that will not send their children to those schools.”

Apparently corroborating the position of Alimi, Aregbesola›s Special Adviser on Information and Strategy, Mr Semiu Okanlawon, emphasised that the recent emergence of an SS3 student of Osogbo Government High School, Akintade Abdullahi Akanbi, as the best science student in Nigeria was a vindication of the effectiveness of Aregbesola›s education policies. He, however, did not speak on the poor performance ratings of the state in the WAEC examinations almost throughout the eight-year life of the administration he served in.

The former special adviser said no one should miss the manifestations of the quality of education programmes put in place in the last one decade with the latest recognition of Master Akintade.

He said this is coupled with a recent emergence of another student as third best scorer in the Joint Admission Matriculation Board examinations last year. “Who knows what feat Osun students would come out with in the ongoing JAMB examinations?” Okanlawon had asked rhetorically.

He stated: “what further proof do you need to tell those who condemned those education policies at that time simply because they were in opposition and they must oppose whatever the Rauf Aregbesola administration did no matter how well-intentioned?

“But we are all vindicated that in less than one decade, the results of those ingenious ideas are emerging in their multiple and beautiful manifestations.

“I congratulate the people of Osun. I congratulate Master Akintade Akanbi. I congratulate Governor Gboyega Oyetola, who was part of this inheritable, good legacy and worked indefatigably for eight years to achieve these noble ideas with his governor. I congratulate my former governor and now Minister, Rauf Aregbesola, for bequeathing to us all a strong legacy.

“I also congratulate Professor Wole Soyinka who spent time for a good cause such as laying a solid framework for Osun to build on. Those who have been genuinely monitoring the progress recorded under the Aregbesola administration will recall that between 2010 to 2017, Osun’s performance in public examinations jumped from 15.58 per cent to 44.69 per cent. This had reached about 68 per cent before the exit of Aregbesola in 2018,” Okanlawon said.

In his own submission, Oyetola’s commissioner for political affairs and intergovernmental relations, Mr Taiwo Akeju, told Sunday Tribune that politics should not be read into the state government›s action, adding that the reversal was not targeted at Aregbesola, but was in response to the yearnings of the populace.

«The reversal of some policies was not aimed at eroding the achievements of Aregbesola as governor, because he has achieved great feats in terms of infrastructural development in Osun.

“There is no crisis at all. The reversal is just what the people want and it was a unanimous decision that the cabinet came up with. Eminent personalities like Professor Olu Aina, General Alani Akinriade and others sat on the panel that made the recommendations for us,” Akeju explained.

In a move that signalled the mass approval for the policy, the Osun State chapter of the Nigerian Union of Teachers (NUT) weighed heavily on the issue by throwing their weights behind the reversal, recalling that teachers were represented in the committee that recommended the review of the education policies.

NUT’s secretary in Osun, Olukayode Salami, observed that single uniform policy had created a lot of challenges within schools, contending that school uniform being source of identification must not be the same in all public schools in the state.

Salami stated “the 4-5-3-4 policy of Aregbesola has been welcomed and tried, but as a result of anomalies and discrepancies discovered it in, we then called for its reversal to 6-3-3-4 and the return to the recommendations of National Policy on Education.

“School merger, as a policy, has caused a lot of troubles for our students, as some them that are male were sent to a school establish for only girls. Some male students are today carrying SSSCE result obtained from Girls’ School. To stop having situations like one, there should be review of the policies.  It was just a review, not a total end for the policies. Teachers are fully in support of government action,” Salami asserted.