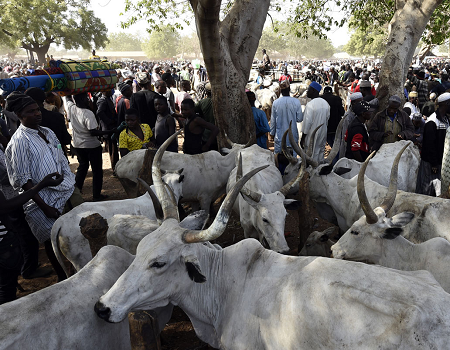 Adamawa, Plateau and Nasarawa States are to begin the pilot implementation of grazing reserves and ranches under the National Livestock Transformation Plan (NLTP) set up by the National Economic Council (NEC).

The chairman of the NEC sub-committee on NLTP and Governor of Ebonyi State, Dave Umahi disclosed this to State House correspondents, in Abuja on Tuesday, after a meeting presided over by Vice President Yemi Osinbajo in his office.

He said the three states are the willing states as those who are not interested will not be forced to implement it.

Umahi revealed that the states have already earmarked land for the reserves or ranches, saying that the federal government will fund the implementation.

Towards this, the three states have been encouraged to submit their evaluation plans for the establishment of ranches or livestock centres.

According to the sub-committee chairman, the establishment of the grazing reserves and ranches will resolve the farmers/herders crisis.

Umahi said: “We have pencilled down three states that we have evaluated: Adamawa, Plateau and Nassarawa.  So, we are going ahead to ask them to submit their programmes and costing for implementation.

“Three states that have grazing reserves and we have spoken to people in the grazing reserves, the traditional rulers, the district heads and the population within that location and they are willing to go with the programme: the NLTP.”

He further explained: “In this programme, you are going to have some farmers that are within the grazing reserves doing their farming and the herders also doing theirs. Of course there is going to be a demarcation.

“The emphasis still remains that it is the willing states. Even if you have grazing reserves like some states in the north and the state is not willing to key into it, it is not compulsory.

“The expectation is that we have clear mandates.  One is that this programme is going to resolve to a very large extent the farmers-herders conflict.

“So, if we revive some of the grazing reserves, especially in the north, for willing states, we are going to see this conflict come down.  Then, also a modern way of cow rearing for greater benefits.  These are things we expect to see.”

Umahi also spoke on the impact of improved rice production on the economy of Ebonyi State.

He said that the Central Bank Nigeria (CBN) Anchor Borrowers Programme has enhanced the Gross Domestic Product (GDP) of the state.

“Our GDP is rising because we get help from the federal government, from CBN and the fertilizer programme.  So, there is no doubt that our GDP is rising and the youth are finding work to do,” he said.

Recall that the NLTP sub-committee was set up by NEC to find a lasting solution to the incessant farmers/herders crises in the country.

The Umahi committee is expected to brief the NEC when the council meets on Thursday.